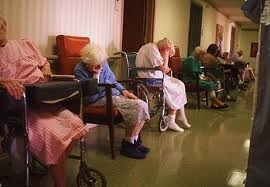 Sometimes when we feel strongly about something we throw all our energies into one passionate viewpoint. The often perceived overuse of anti-psychotic medication in an “off-label” use in nursing homes is one such example. “Off-label” use means that a drug is being used for purposes other than what is was originally intended. Anti-psychotic drugs are used to treat psychoses: hallucinations, delusions, and the symptoms of schizophrenia. In nursing homes, agitated and violent behavior can occur among residents. An off-label use of anti-psychotic drugs is their sedating effect. (I have heard that one of these drugs is used, in large doses, to tranquilize animals such as lions and tigers when they escape from captivity.)

There are too many cases where residents in nursing homes become agitated–and it’s due to lack of external stimulation, boredom, loneliness, and feeling trapped or hopeless. When this occurs, staff may have to restrain them. There are too many injuries that happen to staff in nursing homes. These individuals care for some of our most vulnerable citizens and their profession, I believe, has a much higher injury rate than for police officers. And when they are injured for life, they don’t receive a disability pension to fall back on. A recent letter, written by Meghan Lee of Auburn University, to the editor in the Monitor of The American Psychological Association brings this issue to us in clear focus.

“The article ‘Antipsychotics overprescribed in nursing homes’ (September, Monitor) discusses the horrifying reality of off-label antipsychotic drug administration in nursing homes across the United States. While it is known that individuals in the later stages of Alzheimer’s, or other related dementia disorders, can experience symptoms of psychosis, it is staggering that 14 percent of the elderly in nursing homes are filing for Medicare reimbursement for antipsychotics. In an opinion piece on CNN, Daniel R. Levinson, inspector general in the Department of Health and Human Services, urged nursing homes, family members and pharmacies to pay attention to the ‘black box warning on antipsychotic drugs, which warns of the death risk associated with elderly people with dementia.

“Decline of cognitive abilities aside, one of the greatest challenges faced by both dementia patients and caregivers is the comorbid effects of psychosis. Management of these effects must include behavioral and pharmacological approaches. However, behavioral therapy, such as sensory intervention, environmental safety and maintenance of routines, is significantly underused in nursing homes. The article touches on the lack of proper education in behavioral therapy that nursing homes’ staff members possess, forcing them to use antipsychotics as a quick fix to calm their patients. Because of this, I implore better education of nursing home staff and family members of dementia patients.”

It is true–antipsychotics are overused in nursing homes. It is also true–staff in these places often rely on these medications in order to avoid injuries to themselves. The letter above by Megan Lee nicely summarizes all the issues and offers good suggestions for the kinds of practices that could make off-label overuse of antipsychotics a less common practice in nursing homes.