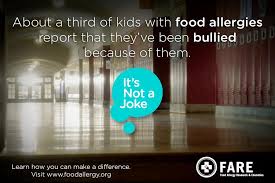 Pediatrics, the flagship peer-reviewed journal of that profession, recently reported on a study of over 200 young people who have been bullied., according to an article in the New York Times. The researchers discovered that almost one third of this group reported being singled out for a food allergy.

For children with peanut butter allergies, the acts of the bullies can have catastrophic consequences. For example, the article recounts how one boy with a peanut butter allergy left his specially-prepared food at his lunch spot. While he got up briefly to do something else, some others children smeared an amount of peanut butter on his sandwich.

When the boy bit into the sandwich, he knew something was wrong, and spit most of the peanut butter out; in the washroom, he rinsed his mouth out with water. Nevertheless, he had a reaction to this, collapsed on the floor, and woke up in the emergency room of the hospital.

There appear to be a variety of ways teachers and others respond. In one state, there is a specific zero-tolerance policy for this kind of bullying. In other states, teachers and others may respond with a more educational response. Here is part of what the New York Times article says:

“In a recent survey of 251 sets of parents and children with food allergies, published in Pediatrics in January, roughly a third of the children reported being bullied for their allergies. Parents knew about the threatening behavior only half the time.

“Dr. Robert Wood, the director of pediatric allergy at Johns Hopkins Children’s Center in Baltimore, gets “very frequent reports” of bullying from patients and their parents, he said. Just last week, one child’s face was touched with peanut butter, endangering the child. Typically, bullying is not as extreme, but the phenomenon has “been there the whole time,” he said.

Now, however, the issue is starting to earn attention. In May, Food Allergy Research and Education, a nonprofit group in McLean, Va., released “The public service announcement, on YouTube public service announcement, highlighting the issue that featured a pupil lamenting the cafeteria as a “scary place.” It has more than 17,000 views, has been shown on the CW network, and spurred dozens of parents to share unnerving anecdotes on the group’s Facebook page.”

Cafeterias in schools have been a traditional place for teasing and bullying to take place, and often there is less staffing during lunchroom periods so it is harder to supervise the larger group of children. In the past, many staff may have also looked at bullying as a prank or as something which must be tolerated.

Milk allergies are still another medical problem made dangerous by bullying.

For children with allergies—bullying can lead to serious or fatal medical results.