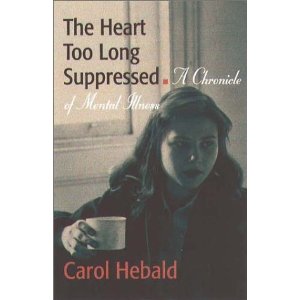 I came across this memoir (with its compelling title, somewhat reminiscent of the work of Clarice Lispector) upon learning its author, Carol Hebald, had been awarded (six years before) the same fellowship I had been given as an undergraduate. The foreword is by iconoclast Thomas Stephen Szasz, known for his anti-traditional “anti-views” of psychotherapy. In The Heart Too Long Suppressed, (2001), Hebald writes of a chilling pattern of childhood abuse among several individuals close to her; about her dissociation from reality; and about her self-willed, up-by-the-bootstraps recovery. Here is a controversial book. In this connection, it is worth noting that The Bell Jar, by “Victoria Lucas” (who, of course, is Sylvia Plath) is scheduled for reinterpretation on the silver screen in 2012.