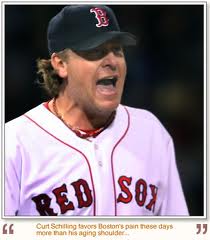 Many remember Curt Schilling for his postseason successes with the Boston Red Sox, including one in which he pitched while in pain and with a bloodied sock. Schilling recently announced that he has formed his own video-game company, which will be releasing a fantasy-oriented game for gamers. The story behind the story here is that Schilling acknowledges that he has ADHD and that video games have had a positive role in his life in dealing with his ADHD.

Like many with ADHD, Schilling said he has always had a need to be immersed in interesting activities in order to remain focused. He said that during his teenage years, he “must have read The Lord of the Rings 20 times” and early in life he found that video games could help keep him interested in doing something constructive. He found that baseball-video games were too simple to hold his interest, and he became an avid gamer of fantasy games.

While in the majors, Schilling often brought various games to the clubhouse and along on road trips, and his interest allowed him to form an immediate and genuine bond with new players. His avocation whetted his interest in computers and how they worked, and while he was pitching he developed software to help him battle his opponents more effectively. He was a pioneer in this regard.

Schilling also noted that the “schedule” of being in the major leagues was a good way to “channel” his ADHD. Baseball’s discipline helped him to remain focused. Therapists who work with persons with ADHD call this “patterning” and they often help the individual with ADHD to set up meaningful routines and schedule markers to help them from becoming unfocused. An article in CNN Geek Out reports:

“Schilling said he was using a computer and helped design software to help him become a better pitcher when most players and teams were using videotape. Of course, the computer also doubled as his gaming rig during his days off.

“As his baseball career progressed and technology became more prevalent with teams, more players started using computers and video games were creeping into clubhouses as younger players join the squad. Schilling made it a point to be one of the take-charge guys when it came time to game.

“‘I was kind of an oddball at the time, and I was around and on some teams that it probably wasn’t the cool thing to have a computer. But obviously it became much more popular to the point where my last couple of years, I had two traveling console set-ups where we had a flat screen, an Xbox and a PlayStation and they would get out and get put up on the airplanes when we were flying around.’

“So as his Major League playing days were winding down and he was eying what to do after his last pitch, gaming seemed a natural fit for a new career.”