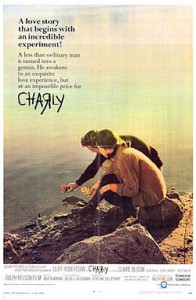 This is the fifth of twenty-one films in the AMHF series of blogs. Charly is a controversial film, about mental retardation and psychiatry. The central controversy revolves around the question, “What is a human being?” Are individuals challenged by developmental delays “to be cured?” Are they not soulful, “whole individuals”? What would be the role of psychiatry in such a scenario?

The title character, Charlie Gordon, is sensitively played by the late Cliff Robertson, who won an Oscar for this role. Charlie works at a low-level job in a bakery and lives alone in a run-down room somewhere in Boston. He is the object of pranks at the bakery, and the only good thing in his life is his caseworker, likewise compassionately portrayed by Claire Bloom. The caseworker is earning her Ph.D. in conjunction with a young man, whom we never meet, set to be her husband.

Unspecified “research-psychiatrist types,” with whom she works, have pioneered a surgical procedure whereby an individual who is not capable of outscoring a mouse in a maze-intelligence test would have his or her intellect boosted. One of the psychiatrists is not only against Charlie as a candidate, for he is considered too old and set in his ways for the procedure, she also later objects to his being rushed with his “new brain,” which is not up to the emotional level of his IQ. The caseworker, however, prevails and following the surgery, and the gift of the lab-mouse Algernon, Charlie slowly attains normal, then super-normal intelligence.

With such sudden intelligence comes an awkward awareness (as the female scientist had predicted) of the biological facts of life. Charlie is eventually dismissed from the bakery once he can no longer be made the butt of the workers’ jokes, and channels his new abilities into a combustible obsession with his caseworker. After attempting to rape her, the pair come to a new realization that they are, indeed, mutually attracted. They decide to marry. But when Charlie faces a questioning scientific community at a specially arranged forum, he can only offer the recent death of Algernon as a sign of his future. Gradually, Charlie’s intelligence fades. He really cannot marry his caseworker, who painfully observes her former lover’s steep decline, to his original mental level.

Technically, the film is dated in its split-screen techniques and love-beads atmosphere. But the message leaves the viewer with other thoughts, on the moral dimensions of psychiatry and science in general. There are many stories circulating about mind control via implants or the use of electromagnetic waves. Such is not science fiction. Reuters recently reports on the military ramifications of “super soldiers,” or soldiers of the enemy rendered passive or completely helpless via electronic waves and mind control. Similarly, no one knows the full implications of stem-cell research, and whether “healthy new brains” can be grown. Would such surgeries leave the individual with the same personality? The same soul?

How, exactly, is a retarded person “sick”? Isn’t “deficiency” but the flip side of “superiority”? What do these categorizations mean with respect to the ancient philosophic questions that define “a fully engaged human”? The filmmakers also delve into areas yet to be explored in this blog, in One Flew Over the Cuckoo’s Nest and the forthcoming remake of The Bell Jar. Finally, Charly does take the thoughtful viewer to the dystopian universes of Brave New World and Nineteen Eighty-Four.

Charly is more romantic tearjerker than science fiction or morality play. But it places the filmgoer—even more than four decades after its release—into “the what-if” dimension of modern neuropsychiatry, as the field confronts the possibilities of going too far, not cherishing who each individual is, and thereby perhaps overreaching: Beware the implications, the unintended consequences.

We wonder what you think. elomke[at]americanmentalhealthfoundation[dot]org