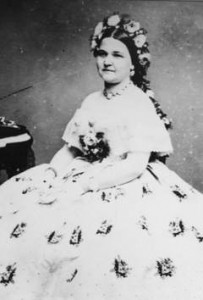 She had to ask for a pension.

By all accounts Mary Todd Lincoln led a difficult and tragic life despite her early upbringing with material comforts and blessings. She married Abraham Lincoln when she was twenty three and was often alone rearing four sons while Lincoln embarked upon his upward political climb. Of her four sons, one died in 1850, another during the Civil War, and still another after the war during Reconstruction.

Some suggest that even prior to the death of her second son and her husband’s assassination that she may have suffered from depression or bipolar disorder. (Yet how does one untangle all these threads of behavior and sadness in the life of a person none of us has ever met?)

One of the saddest elements in her life was the estrangement between herself and her oldest son, Robert Todd Lincoln, who had her certified as “insane” and involuntarily committed to an asylum. The Chicago Sun-Times reports on a historical re-enaction of Mary Todd Lincoln’s insanity trial, beginning this Spring and continuing into September, 2012.

“The wife of the nation’s 16th president saw her husband killed and buried three of the couple’s four children. Her only surviving son, Robert Todd Lincoln, got her committed to an asylum in Batavia after her behavior became alarmingly erratic, but the decision was overturned a year later.

“She died in 1882, broken by grief and suspicious of her son’s motives. Historians debate whether the 19th century legal system treated her justly in labeling her insane.

“To dramatize how changing laws affect the mentally ill, two state agencies are sponsoring mock retrials this fall of Mary’s insanity case. They will be held Sept. 24 at the Murphy Auditorium, 50 E. Erie, and at the Abraham Lincoln Presidential Museum in Springfield Oct. 1.

“Monday, actress Pam Brown, portraying Mary, will receive her ‘summons’ to appear those dates. She will be served at 5:30 p.m. at 54 W. Hubbard, site of her original insanity trial.

“The Lincoln museum and the Illinois Supreme Court Historical Preservation Commission are producing and sponsoring the events. They said funds raised beyond production costs will be used on preservation of historic documents.

“Tickets are available for the retrials and other events planned in connection with Mary’s life. Information is available here.

“The events include a roundtable discussion of mental health issues April 16 at the State Capitol in Springfield and a yet-to-be-scheduled dramatization of the relationship between Mary and her friend and advocate, Myra Bradwell, who helped free her from the asylum. The show will be based on letters they wrote to each other.”

An especially sad part of Mary Todd Lincoln’s life was her need to petition the U. S. government for a pension. She argued that her husband’s death was similar to any soldier who died in the line of duty, and that she was therefore deserving of a widow’s pension. It was granted. The re-enactment of the events of her life after Lincoln’s death–and their pertinence to mental health laws, then and now, appears to be a greatly meaningful endeavor.