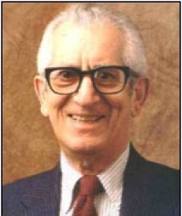 Benjamin Bloom. He had hope for little children...

When I worked in the Astor Day Treatment Program many years ago, our program shared a large inner-city school building with a Head Start Program. It was heartwarming to see young children learning the skills and developing the kinds of relationships that would lead to later success in life. Many didn’t get proper nutrition and home and being able to receive good, healthy food was another benefit of the program. Recently the Chicago Sun-Times cautioned that recent budget cuts in Illinois (note: the article doesn’t specifically reference Head Start) could lead to higher risk of incarceration later in life:

“At a time when sheriffs, police chiefs and prosecutors are complaining that budget cuts to their offices put public safety at risk, a group of law enforcement officials are calling on the state to increase funding.

“‘Either spend the money up front or we are going to spend it later on incarceration, building prisons’, said Rock Island Police Chief Scott Harris.

“He and others pointed to a study that concluded that the 55 million the state saved by cutting Illinois-funded preschool programs; and knocking more than 17,000 children out of preschool; will ultimately cost taxpayers 200 million in increased criminal, social service and educational costs.”

Head Start was an idea of Benjamin Bloom, educator from the University of Chicago. While his name and reputation are perhaps fading, it is good to study and remember the history of Head Start and other preschool programs that developed out of this wonderful idea.