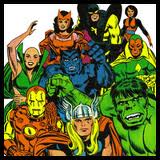 A fan of comic books of old, both DC and MARVEL—I recently saw the movie The Avengers. I was hoping for a respite from all the daily stresses, an immersion in a world of fantasy where good might overcome evil. This was not what occurred.

The story line here is how the earth is being attacked by an outer-space villain, via an astrophysical portal that allows some kind of space travel through different parts of the universe vastly separated by space and time. There is an earthly agency that has some superheros on a retainer of sorts. These gifted ones did not get along and were mavericks, hard to control; however, they care called back into action as the earth’s last defense. It’s either them, or drop a proactive nuke over the island of Manhattan to get rid of the villain and the portal.

I’ve read enough comic books and seen enough action movies to know that it’s possible to combine fantasy, superheroes, and violent events and yet not cross a line that disrespects human sensitivity or real human beings. This movie crossed that line.

Many of the scenes were nearly identical to events shown on television immediately after 9/11/01. There were pedestrians running from buildings and falling debris. The soot and ashes of death and destruction seemed to cover everything. There was even at least one “fireball” scene of a building exploding that was eerily similar to the second World Trade Center tower after it was hit by the second airplane.

Was it really necessary to use New York City as a backdrop for this movie? Could another convincing threat of destruction been concocted by the scriptwriters? How many viewers experienced feelings of discomfort, panic, or even flashbacks of trauma? What message does a movie like this convey to the children of New York City, or any city?

The Hippocratic Oath demands that doctors “do no harm” in their medical interventions with human beings. Hollywood’s screenwriters are under no such injunction. The movie will make money, and this will trump the sensitivities of many who find the scenes eerily troubling but who are too polite to mention it.