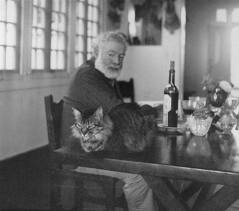 Papa Hemingway as a broken man

A new documentary film presents the emotional health history of a famous American family of artists—the Hemingways—according to CNN, whose sources we quote. This film, Running from Crazy, premiered last week at the Sundance Film Festival. Oprah Winfrey is executive producer.

“‘Suicide has no rhyme or reason,’ [Mariel] Hemingway said. ‘Some people, it’s 20 dark minutes of their life that they decide to take their life that come out of the blue. It’s very random, it’s very frightening.’

“Whether Hemingway is jumping on a trampoline or submerging herself in a cold stream, with her pointed nose and bouncy blonde hair, her message in the film is one of achieving mental well-being and overcoming one’s own problems. These scenes contrast with newspaper clippings, still photos, and melancholy video clips from her family’s past.

“Seven members of [the] Hemingway family have died by taking their own lives, including Ernest and Mariel Hemingway’s older sister, Margaux, she [Mariel] said. Hemingway had denied her sister’s death was a suicide until an event hosted by the American Foundation for the Prevention of Suicide in 2003.”

Ernest Hemingway died in 1961 from a self-inflicted gunshot. He had tried to kill himself before, including throwing himself into an idling-airplane propeller. Not unlike many writers, Hemingway consumed alcohol excessively. There are suggestions that alcohol in addition to possible brain damage from a life of many physical risks played their parts. One reported despondency was Hemingway’s inability to produce written work of the same caliber as his early career in particular.

Many of Ernest Hemingway’s literary productions depict the use of alcohol, including “Hills like White Elephants,” “A Clean Well-lighted Place,” and the magnificent and controversial The Sun Also Rises.

Two well-known quotes from the author refer to alcoholism: “Always do sober what you said you’d do drunk. That will teach you to keep your mouth shut”; and ” I drink to make other people more interesting.”

We hope the new documentary movie will provide information about the Hemingways that will help better understand the complexity of suicidal behavior that can run in a family line.