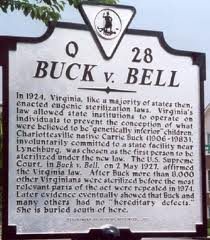 After physicists split the atom, unanticipated positive effects emerged—such as medical isotopes—and many negative ones as well. Where do we store the waste? How do we understand fallout and its deadly effect? What happens when there are nuclear plant accidents?

Biologists work in a similar environment as they work to split the genome. Once again, there may be negative effects unrealized. One is the temptation to use genetic manipulation to “improve” humanity. A look at what happened a century ago gives pause. Then, and now, genetics may be viewed as a way to enhance human thinking and mental health.

At the turn of the 20th century, the writings of Henry H. Goddard and other eugenicists believed that the human race could be improved by selective breeding. This, of course, took the basic genetic work on plants (Mendelov) and applied it the much more complex situation of the human being.

Goddard and others erroneously linked mental retardation with a wide range of other problems: highlighting a “correlation” between “feeble mindedness” and alcoholism as well as a range of criminal behaviors. This, of course, was untrue, but Goddard’s thinking led to thousands of people undergoing involuntary sterilization.

“May 2nd marked the 75th anniversary of a nadir in American law and society. On this day in 1927, the United States Supreme Court upheld the concept of eugenic sterilization for people considered ‘genetically unfit.’ The Court’s decision, delivered by Oliver Wendell Holmes, Jr. included the infamous phrase, ‘Three generations of imbeciles are enough.’ Upholding Virginia’s sterilization statute provided the green light for similar laws in 30 states, under which an estimated 65,000 Americans were sterilized without their consent or without the consent of a family member.

“To commemorate the event, the state of Virginia erected a roadside marker in Charlottesville, home town of Carrie Buck, the plaintiff in the Supreme Court case. Carrie, like her mother Emma, had been committed to the Virginia Colony for Epileptics and Feeble Minded in Lynchburg, Virginia, at age 17. Carrie and Emma were both judged to be ‘feebleminded’ and promiscuous, primarily because they had both borne children out of wedlock. Carrie’s child, Vivian, was judged to be ‘feebleminded’ at seven months of age. Hence, three generations of ‘imbeciles’ became the ‘perfect’ family for Virginia officials to use as a test case in favor of the eugenic sterilization laws enacted in 1924.

“The Superintendent of the Virginia Colony, Dr. Albert Priddy, testified that the Buck family ‘belong to the shiftless, ignorant, and worthless class of anti-social whites of the South.’ Upon reviewing the case, the Supreme Court concurred that “Carrie Buck is the probably potential parent of socially inadequate offspring, likewise afflicted, that she may be sexually sterilized without detriment to her general health and that her welfare and that of society will be promoted by her sterilization…It is better for all the world, if instead of waiting to execute degenerate offspring for a crime, or to let them starve for their imbecility, society can prevent those who are manifestly unfit from continuing their kind. The principle that sustains compulsory vacccination is broad enough to dover the Fallopian tubes. Three generations of imbeciles are enough.”