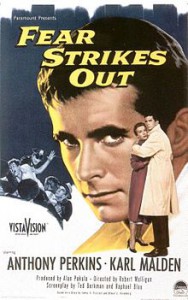 Movie number nine in the American Mental Health Foundation series of twenty-one relating to its mission stars Anthony Perkins (who would famously make a career of playing disturbed individuals: for example in the appropriately named, from the standpoint of this series of essays, Psycho) and the superbly versatile Karl Malden as his unreasonably domineering father (reminiscent of Bette Davis’s mother from Now, Voyager). The film is Fear Strikes Out.

Based on the memoir of intense baseball player Jimmy Piersall and his tragic bout with violent mental illness (“nervous exhaustion”), the movie was released during an era, like the 1940s, in which the social dimensions of private-emotional anguish were generally becoming more openly portrayed and discussed—possibly not in that order.

Though not a Baseball Hall of Famer, Piersall—who is still alive at this writing as far as I know—could be described as a star, having played 1,734 games over the course of an uncommonly long career of 17 seasons, from 1950 to 1967. His lifetime batting average is .272: for non-fans, pretty good. In the offensively charged 1961 season, an expansion year for the American League (meaning the pitching talent was watered down: Roger Maris would slug 61 home runs and Yankees teammate Mickey Mantle launched 54; one-year star Norm Cash would bat .361, an average that would not be matched in that league for decades), Piersall hit .322 over the course of 121 games, mostly in the outfield for the Cleveland Indians.

As a front-line ballplayer, given what the Mob terms Omerta, what police officers refer to as “the blue wall”—in other words the code of silence—it is unusual both for a memoir and a film to be released, on such a combustible theme, during its subject’s mid-career. To mix a metaphor, Piersall’s story was a punch in the gut to Eisenhower America.

As noted, Karl Malden is superb as Perkins’s father, for whom nothing a son could accomplish would be good enough. Perkins portrays an unusually introspective, fragile, articulate ballplayer, in an era when few of them enrolled in college, opting for minor-league contracts. (The college-baseball programs were not as well developed then: they mostly centered around football and basketball, as did the scholarships.)

Fear Strikes Out is a brave, ahead-of-its-time depiction of the emotional toll major-league baseball and life take, over the course of a 162-game (before 1961, a 154-game) schedule. The film is one of Hollywood’s best re-creations of a mental breakdown and a piecing life back together. I cannot think of any film quite like it, though it spawned similar treatments like Bang the Drum Slowly, which in 1973 starred Robert De Niro on the screen—originally a television play over U.S. Steel Hour, starring tyro Paul Newman, which was adapted from a novel published around the time of the film under review.