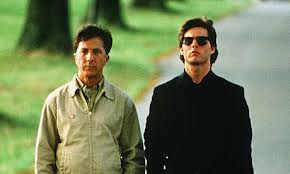 This is the fifteenth movie in the AMHF series of twenty-one. Rain Man won four Academy Awards at the sixty-first Oscars show: Best Picture, Original Screenplay, Director, and Actor—Dustin Hoffman’s second in a remarkable performance.

The film revolves around the relationship between a younger, self-centered brother, likewise played to perfection by Tom Cruise, an inheritance, institutionalization, the misunderstanding of individuals on the autism spectrum, and how family ties can trump all failings. It is a feel-good movie with a message about how society reacts to individuals’ unusual mental conditions.

In part, Wikipedia describes the essence of the plot. During the course of a journey westward, Charlie (Cruise) learns about Raymond’s (Hoffman) autism, which he initially believes is not authentic: resulting in his frequent frustration with his brother’s bizarre antics. He also learns about how his brother came to be separated from his family, as a result of an accident when he was left alone with Charlie, when he (Charlie) was a baby. Raymond one day sings “I Saw Her Standing There” as he did when Charlie was young, prompting Charlie to realize that Raymond is the protective figure from his childhood, whom he falsely remembered as an imaginary friend named “Rain Man”—a mispronunciation of “Raymond.”

Charlie continually proves himself shallow and exploitative, as when it is confirmed by a doctor that Raymond, as a savant, has an uncanny memory and peerless facility with numbers, and packs him off to Las Vegas to win a pile of money. A subplot involves a female companion and her tender handling of Raymond, in contrast to his brother’s thro much of the picture. However, toward the end of their trip and the film, Charlie finds himself becoming protective of Raymond, and grows to love him truly.

There is not much serious knowledge of the autism spectrum to be gained from this entertainment. However, the filmmakers do a fine job of depicting the “dysfunctional reaction” of “society” to unusual mental conditions. In one scene, Charlie has wandered off, nowhere to be found in a small sun-drenched desert city. Raymond finds himself halfway across the street when the Don’t Walk sign begins to flash. Being a literalist with no social sense, Raymond stops walking: smack in the middle of the street. The confusion that erupts causes a meltdown. Another scene involves Raymond’s obsession with a TV program and the lengths Charlie has to go to calm his Rain Man.

If the film has somewhat raised the general culture’s consciousness regarding the autism spectrum and mental-processing issues, the bigger picture is a casting of the condition as a Vegas freak show. One doctor does “get it.” But by and large the medical community, wherein considerable research in this area is being done, where sometimes-controversial interactive techniques of breaking thro the wall are being developed and refined, is a non-factor.

What Charlie faces in early mid-life is a fraction of the frustration and rage and heartbreak frazzled parents, siblings, and caretakers experience in their everyday lives. Unlike Awakenings for example, this is a film to enjoy for its merits: more for its redemption of character, than for any lasting enlightenment on the mysteries of the brain.