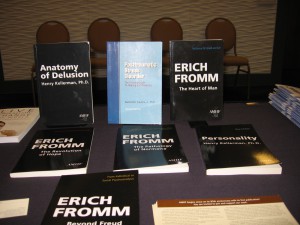 Some of the publications by The American Mental Health Foundation

On March 12 to 15, AMHF and AMHF Books exhibited several of its titles at the American Association for Psychoanalysis in Clinical Social Work Conference in Durham. The conference was co-sponsored by the North Carolina Psychoanalytic Society. Turnout was impressive, and conferees were enthusiastic over the first-ever presentation at this event by AMHF. The foundation is currently exhibiting its books at ISPS (International Society for Psychological and Social Approaches to Psychosis) at Cooper Union in New York City.