Group Analysis and the Insights of the Analyst, Part 2

Sometimes it is interesting to observe a patient’s surprise about another patient’s behavior. Here it is the patient who has made the false prediction. Most often this is not difficult to analyze, especially where it is obvious that only one patient is surprised while the others are not. Here and there, however, when a patient expresses such a surprise, the analyst is forced to admit: “He is right, I should have been surprised, why was I not? What happened here?” Often this is nothing but an example of the analyst’s inertia: he failed to make any predictions at all. In other cases self-analysis reveals: “I was not surprised because I had made a correct mental prediction; why then did I so readily accept the patient’s suggestion that I should have been surprised.” It often turns out that either the analyst never worked through the prediction or that he was overcritical of himself or had in his countertransference a submissive trait.

It is well known that the patient’s general behavior in the group may prove to be quite different from the image the analyst has formed from talks with the patient alone. This calls for self-analysis as to why we were taken in by the patient’s false reports and role playing and what conclusions we can draw from this for the analysis of transference as well ascountertransference.

One of the most useful series of observations is the awareness of our own different attitudes toward different members of the group. This insight is sometimes brought out by direct criticism of a member who points out that the analyst favors or protects one member of the group or is being unfair to another. Certainly we shall first analyze the critic’s motivations for seeing it that way and saying it at that particular moment. But we should not have a preconceived idea that the critic is wrong. It is sometimes too obvious that he is right and sometimes the other group members agree with him. The therapist’s awareness of the actual existence in himself of the criticized attitudes may be aided by observation and analysis of similar attitudes in members of the group toward each other.

All this helps the analyst to recognize his ever-so-slight subconscious attitudes of protection, competition, sadism, masochism, or other sexual attitudes; also those of omnipotence, encouragement, breaking up of hostilities and of acting out. He can see himself better playing the role of a father, mother, teacher, or censor with the different patients in the group. Even where only slight traces of such attitudes are discovered, their analysis may lead to important insights concerning countertransference and thus help in advancing the analysis. The analyst may realize that he is too eager to achieve analytic success, to make scientific studies, or to use the material for teaching purposes. He may observe how such trends not only influence his group techniques but are also felt and often resisted by the patients. Thus I discovered—by listening to the tapings of group sessions—my tendency to use the word “interesting” too often, which betrayed a not-always-conscious attitude of learning or doing research.

Patients criticize the analyst much more often in group sessions than in individual analysis. Even if the motivations for this criticism are obvious, like the need to deny in front of the group the dependence on the analyst, the criticisms may nevertheless be correct. One should not be too eager to accept or reject them. It is well known that patients sometimes reveal in the group things they are unwilling to reveal face to face. Thus one of my patients said in the group, all of a sudden: “Twice during my long analysis I showed the doctor love but he missed the boat.” Such true statements should be investigated not only from the patient’s but from the doctor’s aspect too. Why did the patient not talk about it in individual sessions? How did he “show” love? Why did the analyst miss it?

Let us now say a few words about the second method of self-supervision: the use of experience of group analysis in the subsequent individual session. This situation presents a number of problems. The patient may be very eager to discuss his group experiences or he may not even mention them. He may also refuse to discuss them and resent the suggestion to do so. If he does not talk about them, it may indicate that there actually was not any emotional experience worth discussing in the entire group session. On the other hand, the opposite may be true: the experiences were too strong, there is marked resistance, occasionally even striking amnesia. The analyst has to decide on the proper procedure in every single instance. Another variety of the combined individual and group analysis is exemplified by the case of a patient who was assigned by his group therapist, a woman, to enter simultaneous individual therapy with me. This man, an overt homosexual, suffered from manic-depressive attacks and severe inferiority feelings. His resistances were particularly strong. Even with this combined therapy it took a long time until a noticeable partial improvement of anxiety and inferiority feelings could be seen. He had great difficulties in talking about himself directly. His favorite device was to talk to me about his experience in the last group session: “I was more aggressive, could not talk at all, was very angry at a certain patient.” After a while he began to see that he displayed each time in the individual session with me attitudes identical with those he experienced in the group sessions. This accentuated the insight into his projections and was helpful in the analysis of his transference process (and the accompanying resistances) to both his group and myself.

Thus he told me a dream in which he saw his female group analyst speaking on the telephone. She was very persuasive; however, the patient was only a cool observer. The analysis of this dream deepened his insight into the resistances against both of his therapists—a transference in both cases of his ambivalent attitude toward his mother.

One of the most important sources of insight for the analyst in these after sessions is this: quite often something that appears as the most exciting, shocking, interesting experience to the analyst seems to make not the slightest impression on the patient.

On the other hand, the patient may appear in the subsequent session very excited about a new insight gained in the group, where the analyst sees only something that has been unearthed long ago and ventilated many times. Here again the situation is not simple: this “important insight” phenomenon may be just another product of resistance, an attempt to mislead the analyst. But it may just as well be genuine and in such case very important.

What does it mean? What is the difference between the reaction of the analyst and the patient to the same insight experience? The difference is not in the content of the experience but in the different degree of importance as seen by the analyst and the patient. For reasons calling for deeper analysis in both the patient and the analyst, a fact that appears as very important to the analyst is of minor importance to the patient and vice-versa. Similar things can be observed directly in the group session: a patient giving an account of his life history or his neurosis in the group may without hesitation claim a certain event as the crucial point of his life or his neurosis; however, the same event may not be presented as crucial in individual analysis or perhaps only in the first few sessions. Again the patient either covers up or reveals something in the group; but whatever it is, we are not dealing here with any new contents from the unconscious. It is only a shift in the emphasis, in the degree of importance—the unimportant is made crucial, the crucial unimportant. The content, however, has been either made conscious long ago or was never repressed at all.

This special mechanism of resistance was to me the most out standing lesson derived from this special combined method in cases of particularly long-lasting analysis. Whether it applies to all patients or just to the modern intellectual patient, well trained in psychoanalytic thinking, I cannot yet tell with certainty. You will probably notice that it bears some resemblance to a normal mental mechanism: that of ignoring, diverting attention and not focusing on something unpleasant without repressing its content or correlations. This mechanism of not repressing the content but repressing or exaggerating the importance of certain conflicts in relation to the patient’s self and his goals in life was the preferred defense mechanism in my long-treated patients.

The distinction between what is and is not important for us in our psychic life is, however, one of the highest functions of our superego. It is therefore easily vulnerable not only to repression but to disease, exhaustion, alcohol, drugs, etc. It is also easily distorted by the analyst’s own prejudices, interests, and projections. This, in my limited group experience, was shown to be one of the most important causes of undue prolongation of analytic treatment. The awareness of this problem was perhaps the greatest benefit of the added group psychotherapy.

I shall not discuss in detail the use of recordings for self-supervision. We all know that our own voice sounds on recordings more like other people hear it and different from the way we hear it ourselves. This has physical reasons. I do not believe, however, that physical reasons alone are responsible, because it is often also the tempo, modulation, accent, etc., which may surprise us: our entire image of ourselves as a speaker has been in this case different from reality. If we listen carefully we may also notice the fine changes of that whole pattern as related to certain patients in the group or to certain topics. We notice that at times the analyst’s behavior pattern is influenced by the group. I do not say it should not be, I only claim that the analyst should be conscious of it. We can observe and analyze our hesitations, our unintended directiveness, our avoidances. The separation of the disk or tape of the verbal communication from other communication systems (mimicking, gestures, psychosomatic effects) also permits interesting observations: sometimes one of these systems seems to function more immaturely than the others.

As to the future of group analysis in general and the combined forms, predictions should be made with caution. Right now a great variety of nonanalytic group therapies claim favorable results, rarely substantiated by reliable data. As long as we do not have figures comparing the quality of results (including long-term follow-up) and the duration of treatment (or rather the number of sessions) for the individual analysis as compared with group analysis and for the combined forms, we can base our judgment only on impressions. 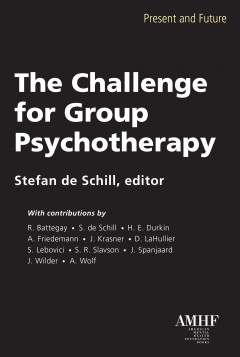