Funding cuts for the Developmentally Disabled 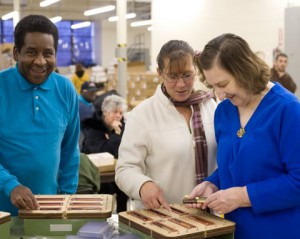 This article appeared in the December 30, 2009 and January 6, 2010 editions of The Hudson Valley News

We are in a recession. There simply isn’t enough money to keep New York State running as it has in the past. Governor Paterson can’t be blamed for a partially filled treasury. All forms of special-interest groups are lobbying to keep their own status quo and remain untouched.

Crys McCuin, Executive Director of Dutchess ARC, said that budget cuts, as they exist now, would cause direct damage not only to consumers of her agency, but in other ways often unacknowledged.

“Last year there was no increase of most budgets serving the developmentally disabled,” said McCuin. “In many agencies, the budget for support services–such as finance, human resources, quality assurance, administration–is kept low, usually around 10% to 12% of the total budget.

“Dutchess ARC historically runs a lean budget, very lean, at about 8%. When support services are this low, they can’t be trimmed any thinner, so you become forced to make cuts at the programs and services level. And many organizations in the Hudson Valley are now at this critical point.

“In my 13 years as director of this agency, I have never been in a budgetary situation like this, one where financial cuts will impact the heart of what we do, where they threaten to take away the services we cherish the most.”

Many are surprised when they learn that the Hudson Valley has one of the highest percentages of special needs individuals in the United States. The closing of the immense Wassaic Developmental Center returned nearly 6,000 residents to our population, and many developmentally disabled persons settled here when Letchworth Village in Rockland County and Willowbrook State School in Staten Island became empty buildings.

Who Are the Developmentally Disabled?

By medical and legal definition, these are persons who display significant cognitive or daily skills deficits before age 21. Mental retardation, autism, fetal alcohol syndrome, Down syndrome, Prader-Willi syndrome, and seizure disorders are among the most common conditions, and genetic anomalies cause a variety of lesser-known conditions.

Programs in school districts serve many developmentally disabled persons until age 21, and although school-district taxes are one source of funding, there are other sources that will be impacted upcoming budgetary restraints.

Early intervention programs for children birth to age 2 offer expert assistance in speech and language, fine and gross-motor skills, and daily living skills. Neurologists point out that it is during these years that brain development can be nurtured, and the window of opportunity for helping these children is precious. Abilities First and Saint Francis Preschool offer early intervention programs.

Although these programs are expensive, there is bottom-line payback as research shows children receiving these services require fewer services later in life.

Many programs serve children and adults. Some of these include: Anderson Center for Autism, Greystone Programs, Taconic Resources, New York State Office of Developmental Disabilities-Mental Retardation (OMR-DD), New Horizons, Cardinal Hayes Home, Ulster-Green ARC, United Cerebral Palsy-Community Rehabilitation Center, as well as programs mentioned in this article. Types of programs include day vocational programs, day treatment programs, family support, recreational programs, and group home and residential centers.
Considered together, these agencies are one of the major employers in the Hudson Valley, and one conservative estimate places their combined annual budgets at between $150 million and $200 million. “If we are forced to lay off staff–and I emphasize, we are not at that point yet,” McCuin notes, “it will compound economic issues in this community, so it is important for everyone to understand the ripple effect.
—————————————–end of part I————————————————————
Day Programs Especially Vulnerable

John Thoman, Executive Director of Abilities First, an agency providing a full range of service to individuals with disabilities, emphasized that the vocational workshop program is slated to receive some of the most drastic reductions in funding. Over the past 15 months, the program has received two other funding cuts.

“In the 31 years I’ve worked with this agency,” said Thoman, “I have seen cutbacks, but this one is the most devastating. Right now our workshop program is scheduled to lose an additional $38,000.00 in the first quarter of 2010. The total decrease in funding from the Office of Mental Retardation and Developmental Disabilities (OMRDD) for this program over the past 15 months is approximately one quarter of a million dollars. This has resulted in the loss of 3 and 1/2 staff positions, including a floor supervisor and truck driver.

“Since our industry is 70 percent personal-benefit costs, you have to recoup losses by not replacing people. Those left have to pick up more work. And overall, we’re still expected to do the same job, especially keeping everyone safe. This puts a real burden on our staff. They have dealt with this extremely well, and continue to show great dedication to our consumers, even though they did not receive a raise in 2009.

“We have tried to shrink every excess cost possible. One way has been the establishment of a consortium of eight agencies where we cooperate to buy supplies and utilities at reduced costs.

“Despite these efforts, we see no relief coming from the state.”

“Our workers arrive at 8:45, go to their work area, and begin working on sub-contracting tasks such as sorting, assembling, packaging, and boxing. They have a mid-morning break, and then work until lunch. After lunch, they attend two hours in the Day Habilitation Program, with each individual receiving personalized attention on objectives related to areas such as handling money, academics, computer skills, or others designed to meet that person’s specific needs in an effort to become more independent and better suited to function in the community.”

One common theme expressed by all administrators interviewed for this article was gratitude toward their particular staff members for supporting consumers as financial resources has dwindled. “The direct care staff who work for us at Dutchess ARC in the day programs and the Rec and Teen Club programs are the most amazing people I’ve ever seen,” said Catherine Ottaviani, Director of Day Services at Dutchess ARC. “Each day I’m humbled and honored to be able to watch their magic.”

Memory of Past Systemic Abuses is not Forgotten

Program and staff reductions in these programs remind many, especially parents, of abuse suffered by the developmentally disabled, in New York State and nationally.

“A snake pit”–words spoken by Senator Robert F. Kennedy in 1967 after visiting one program in New York State.

‘I’m a farmer and I take better care of my animals than do these institutions,” said one parent interviewed by Geraldo Rivera in 1972 in the documentary “Willowbrook: The Last Great Disgrace.”

“I’ve visited the worst jails, the worst brigs in the military, and I’ve never seen conditions like this,” said Congressman Mario Biaggi while being interviewed by Rivera.

This history causes parents, agencies, and advocates to be watchful for any events even remotely suggesting a return to those old days, and many view the Governor’s budget as backsliding toward the dark past.

New York State ARC is sponsoring a drive involving all agencies, parents, and program participants in New York State to make Governor Paterson aware of the specific losses that will occur in programs serving the developmentally disabled in New York State when budgets are cut.

This message has been sent out to all of the different ARCs in the state, including Dutchess ARC, Ulster-Greene ARC, and Putnam ARC: “The Governor has about another month to make decisions. Big decisions can be made at the last second like whether or not a budget includes a trend. Once the Governor sends the message to the Legislature it will not be easy to make big changes.”

On January 7, 2010, the New York Association of Community and Residential Agencies is sponsoring STATEWIDE ADVOCACY DAY where, in their own districts, parents, family members, and direct support professionals will meet with State Legislatures within each district. This is timed so that the Governor can receive input before the final draft of the 2010-11 Executive Budget, scheduled to be presented to the New York State Legislature on January 19, 2010.

Governor Paterson was contacted and presented with the major points of this article and asked for a response, and information was provided back the same day by Matt Anderson, Spokesperson for the Governor’s Office in Albany.

“These programs for the developmentally disabled are programs the Governor supported throughout his career in the legislature, and it pains him to have to make budget cuts affecting them now.”

Despite this, Anderson emphasizes, “We’re always willing to hear from advocates of interested parties.”

“Be aware that when the Governor talks about cutting services–he is talking about changing people’s lives,” said McCuin, Dutchess ARC’s Executive Director.

“A number of individuals we serve do not have families that can say, ‘If you need to, you can come and live at home.’ The proposed cuts do not merely take away trips to the mall, vacations, or other services that are nice but not essential; we are talking about taking away people’s homes, health care, transportation, and work.

“We encourage everyone to contact their state representatives. Ask questions. Stay informed. Make your opinions known.

“These losses will go right to the heart of what we value in our own lives.”

William Van Ornum is a clinical psychologist, parent of a young man with Down syndrome, and board member of The American Mental Health Foundation in New York City.