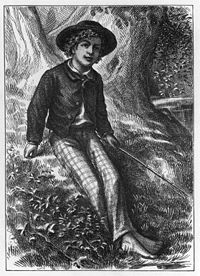 On this centenary of Mark Twain’s death, we look back at Tom Sawyer and Huck Finn.

While psychologists have written thousands if not millions of words on the effects of separation and loss in all our lives, Mark Twain taught about these powerful forces in the lives of two young boys growing up.

Tom Sawyer lived with Aunt Polly; his mother had died and we have no clues about his father. Huck Finn is a child of the streets, having a father–a cruel one.

“The Adventures of Huckleberry Finn” is worth re-reading in this 21st century; it is as truthful and poignant an account of foster care, adoption, homelessness, racial prejudice, and effects of alcohol on families as can be written today by any psychologist.

One of the last lines lives in my mind and heart, an emotional ground-zero of sorts. The good citizens of Hannibal, Missouri, are holding a funeral for Tom Sawyer. When Tom walks alive into his own funeral, he’s smothered in kisses and attention. Huckleberry stands awkwardly aside, alone.

How many mental health conditions today are caused or exacerbated by separation and loss?

There are some good approaches here:

Effective ways of helping children deal with separation and loss