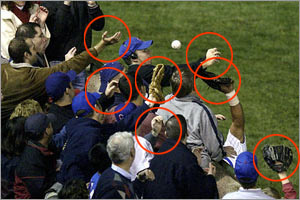 This week brings a big welcome to Dr. Raymond B. Flannery Jr. of Harvard Medical School, whose expertise in many fields including stress and violence prevention is greatly needed.

It is also the time of year for the football season to be getting underway and for baseball season to reach a sometimes-fevered high of playoffs, pennants, and a World Series that in some years past has lasted until November.

Seeing that Dr. Flannery has written two excellent pieces here recently on violence prevention, I thought it might be worthwhile to examine the phenomenon of fan violence as it too often occurs in professional sports. Recently there was good news on Mr. Bryan Stow: He is recovering from an attack of nearly six months ago, and went outside for the first time. The eminently bad news paired with this is that Bryan Stow, a San Francisco Giants fan, was mercilessly attacked outside of Dodger Stadium at the beginning of the baseball season.

Psychologist Stanley Schachter, in his classic research, points out that any kind of arousal of our nervous systems can lead to a “fight or flight” reaction when an external event combines with the internal-chemical cues of increased norepinephrine present in the brain. Children of all ages riding in the back seat learn to be very quiet when Mom or Dad is overwhelmed with the stress of a traffic jam. This illustrates Schachter’s point; but we often forget that high levels of positive stress and excitement can trigger opposite reactions of anger and even violence.

Such a reaction occurred eight years ago at Wrigley Field in Chicago. Replays of the game between the Cubs and the Marlins show an excited and hopeful crowd as the home team appeared headed for their first pennant in six decades. Steve Bartman, a fan with an excellent seat near the left-field foul line, along with others, attempted to catch a foul ball the Cub outfielder Moises Alou headed toward. It is still unclear what happened, but Alou missed the ball. None of the empires called fan interference and the Marlins went on to score 8 runs.

Cubs Security staff was prescient and sent a cadre of beefy officers to the left field stands to escort Bartman to safety. One of the videos under the stands shows a fan lunging toward Bartman, who is saved only by the intervention of a Chicago Bears-sized guard who provides a strategic block just in time. Bartman got home safely, where his home was guarded by the police.

These occurrences are a reminder of the potential for violence at any large sporting event wherein passions run high and moods can switch from excitement and joy to intense anger in less than a second. One also has to factor in the addition of alcohol consumption, which further increases potential for violent acting-out. Let’s hope fans will recognize any situations that seem to be getting out of hand and take steps to de-escalate before there are injuries to anyone.