Order of Malta Meets in NYC 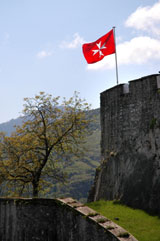 This past week the Order of Malta (Sovereign Military Order of St. John of Jerusalem of Rhodes and of Malta) met in New York City. This is a lay religious order of the Roman Catholic Church whose members are dedicated to serving the poor and the sick. They represent a 900-year-old history of helping the poor and sick around the world. Included in their mission is helping children with psychiatric problems and those with developmental disabilities, two groups which AMHF seeks to serve in its programs.

During 2011, the Order of Malta provided grants to programs that fall under the above mission. St. Catherine Academy of Fairfield, CT, received a grant to buy educational material used in the adaptive high-school transition programs for students ages 5 through 21 with multiple disabilities, including intellectual disabilities. Malta House, Inc. of Norwalk, CT, received a grant to provide the babies of current and former residents of Malta House the opportunities and infant care for optimum physical, social, emotional, and cognitive development.

Other Malta grant recipients included Community Access, Inc., of NYC with a grant to assist poor people with psychiatric disabilities to become economically self-sufficient by supporting job training placement programs, and job retention services at Howie the Harp Center. The Diocese of Camden, NJ received a grant to support the recruitment of mentors to help adjudicated young people who are referred by the courts.

The Archdiocese of New York Catechetical Office received a grant to write, print, and publish a guide for Faith Development of Children with Disabilities.

In 2009, AMHF presented the Archdiocese of New York Astor Services for Children programs with a grant of 5,000 dollars and the Stefan de Schill Award. Astor has used the funds for its research and training program, which includes the oldest pre-doctoral internship program for clinical psychologists in the United States.

As a member of the Order of Malta, I attended the conference and am striving to make others aware of the good works accomplished by this vital group.