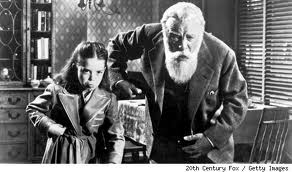 Faith never makes monkeys out of us

On May 2, 2012, it will be sixty-five years since release of Miracle on 34th Street. But the film is hardly ready for retirement. It is one of twenty-one movies identified by AMHF for discussion relevant to the Foundation mission statement.

Released one year before Dr. Stefan de Schill assumed directorship of research at AMHF, Miracle on 34th Street is about delusion and the nature of goodness and sanity. Who is delusional? The seemingly “rational mother,” Doris Walker (Maureen O’Hara), and her “illusion-free” daughter (Natalie Wood)? Or the gentleman who, in all candor, says that he is Santa Claus? In this sense, Miracle shares some thematic elements with the previously discussed satire, Don Juan DeMarco.

The Miracle story is relatively simple, even with its many twists of plot. Since the film is shown on commercial-television stations on a regular basis (and even has been remade), there is little need to detail all the doings. A kindly old man named Kris Kringle is hired by Macy’s, as a Santa Claus impersonator to replace an alcoholic “Santa,” for the Holiday Season; is institutionalized for his claim; and is exonerated both by the court of New York State, and to viewers via a miraculous and surprise ending.

There are two “psychiatrist types” in this movie. One, whose professional qualifications are murky, functions as a human-resources official. This is Granville Sawyer of Macy’s. When the neurotic Sawyer has Kris confined, as a menace (Kris has little choice but to bop Sawyer), to Bellevue Mental Hospital, where he (Kris)—feeling betrayed by his friends and obviously discouraged—deliberately flunks a psychological exam, all seems lost. Even Dr. Pierce, of the geriatric facility Kris had called home, has stamped Kris as a mentally sound do-gooder. It is finally up to a State Court, on Christmas Eve, to free Kris to spend that night delivering toys to all the boys and girls of the world.

This movie is a satirical depiction of the psychiatric world and its view of elders. Like all satire, it has the purpose of instruction as well as delighting. When professionals are faced with a situation that they do not entirely understand they might react as Sawyer does. Or, more responsibly and objectively—more scientifically—they may admit to the limits of their knowledge, as Dr. Pierce essentially does. The ultimate judgment on the Truth is almost theological in nature: coming from the heart.