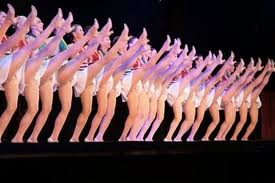 Some occupations appear to put persons employed in them at risk for eating disorders. Flight attendants, dancers, actors—persons in these lines of work must maintain unforgiving standards of weight and general appearance in order to ply their trade. As such, they may employ tactics of severe calories-restriction or eating, and then throwing up. (Binging-and-purging as it is called.)

A new book, highly recommended to readers of this blog, will soon be released about a former Rockette—one of the dancers who has graced New York City through Christmas

“Ballet has the Black Swan. She was the dark Rockette.

“Greta Gleissner came to New York to make it big — landing a glamorous role as a high-kicking beauty at the famous “Radio City Christmas Spectacular.

“But instead of towing the glittering dance line, she fell into a downward spiral of bulimia, humiliation and despair.

“’I remember thinking this was supposed to be the job that allowed me to change my life,’ Gleissner, 38, told The Post. ‘It didn’t. It got even worse.’

“Her memoir, ‘Something Spectacular,’ to be released next month, chronicles her time as a tortured dancer who would spend hundreds of dollars a week on junk food, and nearly killed herself throwing it up between performances.”

This book reveals the damaging psychological pressures involved in maintaining image and appearance.