Not Your Grandfather’s VA 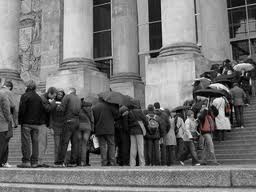 In yesterday’s blog I noted the level of professionalism and service that was accorded to veterans in the VA system after World War II. My grandfather, a World War II vet, received one of the earliest heart pacemakers as well as top-notch cardiac care, all at no cost (although one might view the treatment as payment for earlier services rendered in the U.S. Army). Today’s Memorial Day Op-Ed piece in the New York Times laments that this kind of care may be nonexistent today.

“THE Department of Veterans Affairs, already under enormous strain from the aging of the Vietnam generation, the end of the Iraq war and the continuing return of combat troops from Afghanistan, announced in April that it would increase its mental health staff by about 10 percent. But too many veterans waging a lonely and emotional struggle to resume a normal life continue to find the agency a source of disappointment rather than healing.

“The new hiring is intended to address the infuriating delay veterans face in getting appointments. The V.A. says it tries to complete full mental health evaluations within 14 days of an initial screening. But a review by the department’s inspector general found that schedulers were entering misleading information into their computer system. They were recording the next available appointment date as the patient’s desired appointment date. As a result, a veteran who might have had to wait weeks for an appointment would appear in the computer system as having been seen ‘without a wait.’ That allowed the agency to claim that the two-week target was being reached in 95 percent of cases, when the real rate was 49 percent. The rest waited an average of 50 days.”