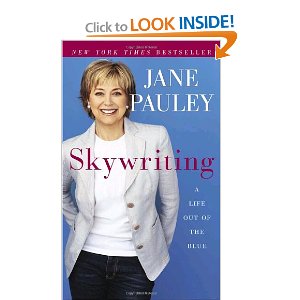 One of my favorite television persons–Jane Pauley–experiences bipolar disorder and has written about it in the book Skywriting: A Life Out of the Blue . Here is her description of one of her episodes:

“My husband, Garry, was becoming concerned. When I started talking about my own line of clothing, his concern upgraded to alarm. The better I felt, it seemed to me, the worse he felt about it. I accused him of being happier when I was depressed. Everyone else seemed delighted. My agent, Wayne Kabak, had never seen me more energized and engaged. While full-throttle drive and ambition weren’t the norm for me, they were for everyone else on his client list. I’d always been the exception. My calendar for February was filling up with meetings. But March, April, and May were completely, deliciously blank.

“Three years before, during my last contract negotiation, I had asked for time instead of money. If anyone at NBC had ever done such a thing, I wasn’t aware of it, but I had the idea that we could take the children to Europe for the whole summer; I had heard there were families who did things like that. Alas, mine wasn’t one of them. The kids were horrified: ‘She’s not going to make us do that, is she, Dad?’ I surrendered. But I still had the time coming to me. I remembered it now, and it seemed just what I needed.

“Asking only that I wait until the end of the key ratings period in February, Neal Shapiro generously agreed. He didn’t argue, as he could have, that the time period agreed to in the contract had been summer, not the regular TV season. Neal may have noticed something; Andy Lack did. After the party, he went to Tom Brokaw: ‘You know Jane so well. Is she okay?’ I was starting to wonder myself. It seemed harder and harder to prepare for an interview; I either procrastinated or I wasn’t able to concentrate. I was of two minds about my new persona. On the one hand I was impressed with my new creative energy, but on the other hand I was suspicious that I didn’t have it completely under control. Sometimes I was raring to go; other times, just hanging on. I desperately wanted that sabbatical.”

Jane Pauley’s readable and touching account of her life will resonate with anyone interested in learning more or coping better with bipolar disorder.