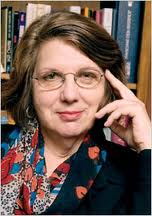 Marsha Linehan, always a leader in the psychological profession for her work with people with borderline personality disorder, became well known to the public when the New York Times featured a front-page article on her. In this, Linehan revealed her own personal struggle with borderline personality disorder as a teen. She was hospitalized around the age of 17, began a spiritual journey in addition to her psychological struggled, earned a doctorate in clinical psychology at Loyola University of Chicago, and transformed behavior psychology into a much more complex vehicle of therapy that went way beyond identifying/changing measurable behaviors and/or thoughts.

In this article, they note how traditional behavior therapy has eschewed analysis of human consciousness, leading clients to perceive they are not being understood. Since such empathy is an empirically-validated component of all successful therapies, Linehan constructed what she defined as Dialetical Behavioral therapy (DBT).

There are five elements of DBT: (1)a biosocial theory of disorder that emphasizes transactions between biological disposition and learning; (2) a developmental framework of stages of development; (3) a hierarchical prioritizing of treatment targets within each stage; (4) dilineation of the functions that treatment must serve; and (5) sets of acceptance strategies, change strategies, and dialectical strategies.

DBT can be distinguished from “traditional” behavior therapy in these three ways: (1) a dialectical philosophical framework, (2) the integration of Zen principles and practices within a treatment focused on the application of Western social behavioral principles, and (3) the therapist acceptance strategies of validation, reciprocal communication style, and environmental intervention.

The dialectical aspect of DBT involves bringing together different aspects of a client’s existence that may appear to be disparate or even disjointed. Some may view this as similar to the “insight” process of traditional psychoanalysis. Contradictory truths may stand side by side or may evolve (thesis/antithesis/synthesis). Goal-directed activity is important. The Hegelian notion of a world in process–with a teleological unfolding of Truths–undergirds DBT.

One of DBT’s primary concepts is Core Mindfulness, where there is synthesis of acceptance and skillful means. This draws not only on Zen but also the contemplation of trappist monks and Eastern meditation practices:

“”Mindfulness is both dictated by dialectics and at the center of DBT. It is both the practice of the therapist and the core skill taught to clients. Mindfulness has to do with the quality of both awareness and participation that a person brings to everyday living. It is a way of living awake, with one’s eyes wide open. The roots of mindfulness practice are in the contemplative practices common to both Eastern and Western spiritual disciplines, and the emerging scientific knowledge about the benefits of ‘allowing’ experiences rather than suppressing or avoiding them.”

Radical acceptance is another core concept of DBT: “As a practice, acceptance is highly important in working with impulsive, highly sensitive, and reactive clients. Validation is an active acknowledgement, often offered as an antithesis or synthesis to a distorted expectation or belief. It jumps the tracks of demand, soothing or defusing the emotional arousal associated with failure, feat, shame, unreasonably blocked goals, or a variety of other stimuli.”

Empirical studies have shown that DBT works when it is applied to use with persons with borderline personality disorder. As such, it is a therapy that combines theory and philosophy with efficacious practice.