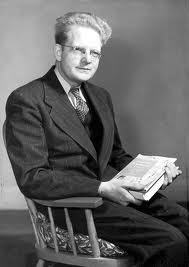 Frye, perhaps around the time he wrote "Fearful Symmetry"

There is much more to be said on this centennial anniversary of Northrop Frye’s birth. After reading Evander’s recent blog, I ordered a copy of Frye’s Anatomy of Criticism. This edition included a new foreword by Harold Bloom.

How is Frye’s work related to mental health? Evander’s posting makes us wonder if Frye’s work and the field of mental health are separate Venn diagrams, or lines of asymptote that never converge. Perhaps this is so. But I think a case can be made for these two disciplines sharing many similarities in which they approach human experience, its classification, and ultimately a full understanding of human beings, their emotions, and lives. Seeking to discern how they do this may suggest ways of combining them—creating a more powerful prism for understanding human behavior, as the current lens of “cognitive therapy” in psychology too often sees only the flinty and fleeting atoms, and not the molecules of human thinking.

One of the tasks of any therapist is to become empathic with the person who seeks out help. Empathy is not the same as sympathy and can take many forms; for example, an accurate diagnosis is empathic, as well as a reflection of feelings about complicated and bedeviling issues and circumstances in a person’s life, and how he or she views them. Is not empathy also a central task of a literary critic like Frye? I think so. For millennia, authors of all types and cultures have been writing about, and trying to understand, the kinds of problems that now bring persons into the office of the mental-health professional.

However, Frye sees the task of empathy as involving differences in content and form—as well as private versus universal—distinguishing the role of psychologists and literary critics:

“A psychologist examining a poem will tend to see in it what he sees in the dream, a mixture of latent and manifest content. For the literary critic the manifest content of the poem is its form, hence its latent content becomes simply its actual content, its dianoia or theme. And this dianoia on the archetypal level is a dream, a presentation of the conflict of desire or actuality. For the psychologist all dream symbols are private ones, interpreted by the personal life of the dreamer. For the critic there is no such thing as private symbolism, or, if there is, it is his job to make sure that it does not remain so.” (Anatomy, p. 111)

There is similarity in how both literary criticism and psychology are but a beginning on a long journey, which may or may not lead to them becoming sciences like empirical biology, chemistry, or physics. Frye contrasts his discipline of literary criticism with that of other sciences:

“Sciences normally begin in a state of naive induction: they tend first of all to take the phenomena they are supposed to interpret as data. Thus physics began by taking the immediate sensations of experience, classified as hot, cold, moist, and dry, as fundamental principles.”

As science became more developed, it become explanatory and replicative. Frye’s own discipline has not reached this stage:

“It occurs to me, that literary criticism is now in such a state of naive induction as we find in primitive science. Its materials, the masterpieces of literature, are not yet regarded as phenomena to be explained in terms of a conceptual framework which criticism alone possesses.”

This view of literary criticism vis-a-vis a philosophy of science mirrors Joseph Matarazzo’s view of “psychology as an emerging science based on craftsmanship.” Matarazzo is a former president of the American Psychological Association, and a neuro-psychologist as well, and he understands that the complex phenomena of human behavior are yet to be explained by psychology’s current ability to predict and control tiny and isolated portions of the human personality.

I hope this centennial celebration will inspire reflection on ways to combine psychology with forms of literary criticism; and I encourage those looking for excellent books to read some of Frye’s other works, such as his work on William Blake, The Great Code: The Bible and Literature, and Northrop Frye on Shakespeare.