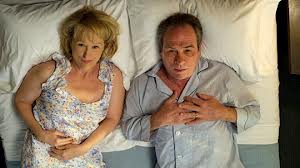 A miserable marriage is certainly a mental health issue. Hollywood has profiled many of these “stuck” relationships—from those who have made lifetime vows to those with other but important commitments. Witness the continuum from Who’s Afraid of Virginia Wolf? to “The Brady Bunch.”

Now, we have Tommy Lee Jones and Meryl Streep—at a time when many stars like them are entering their twilight years—provide us with a refreshing and funny look at how a 31-year-old marriage can be saved from dying embers and set ablaze once again.

The basic story line finds Jones and Streep leading a staid and comfortable life in a Midwestern town. Jones brings in good money as a successful but extremely rigid accountant. Each day starts the same, and I was reminded of Ground Hog Day in the number of similar scenes at breakfast where the only change was Tommy Lee’s suit for work.

They sleep in separate rooms. Jones has a set routine of watching golf programs and then falling asleep in his chair. Streep puts up with all this, at the expense of incredible inner sadness. Finally she buys a week-long marriage transformation program with a marriage therapist (played by Steve Carell) in Maine.

I don’t want to spoil anyone’s enjoyment of this terrific film, but let me say that Carell does an outstanding job as a therapist who is caring, empathic, respectful, positive, and adept at strong but gentle confrontation. The best part of the movie for me was watching the epilogue that played while the final credits were rolling.

By the way, “Marriage and Family Counseling” became a licensed mental health specialty a few years ago in New York State, and it also holds this status elsewhere. I wouldn’t hesitate to show this movie to marriage-therapists-in-training.