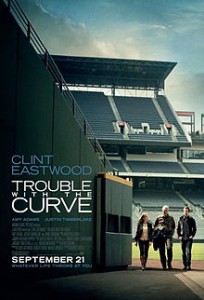 Clint Eastwood in the first-named movie, released over the weekend, is an old-time baseball scout who scours the South in his well-traveled Mustang, attending high-school and minor-league games to find the next baseball phenom—as Mickey Mantle was improbably discovered by Tom Greenwade several generations ago.

The Eastwood character knows baseball so well that he can tell a player’s capabilities by the sound the ball makes when meeting the bat or the glove. This is well and good, because he has been recently diagnosed with macular degeneration and cannot see the ball very well.

The team he works for, the Atlanta Braves, has hired a new executive who brings in statistics and computers and who claims to be able to predict a player’s future performance based on his past statistics.

This, of course, is the theme in the recent movie Trouble with the Curve, wherein Brad Pitt plays the general manager who rebuilds a team using new and creative statistics beyond batting average and bases on balls.

In Moneyball, statistics and computers pave the way for a record 20-game winning streak, a major-league record.

He is sent South to evaluate a young player who has been blasting balls out of minor-league parks. Eastwood’s colleagues believe this upcoming star can rebuild their franchise. But before investing tens of millions of dollars, they want Eastwood to sign off on their hunches.

Behind his back, the new guy in the front office has put together incredible computer statistics that “proves” the young player will become a superstar. Eastwood thinks not—basing this only on the split-second sound the slugger’s baseball bat makes when meeting the ball.

These two films capture a similar debate—and often acrimonious divide—which oscillates in the fields of psychology and education.

On the one hand, there are psychologists who believe that intensive testing yields the best understanding of a person. In education, the No Child Left Behind (NCLB) brings a similar quantitative viewpoint.

Bringing in a metaphor from the field of cooking, this is also known as the “Betty Crocker” approach: following rules and direct steps, and sticking to them literally. Contrasting this is the Escoffier approach, named after the great French chef who understood cooking and made his creations intuitively and creatively, measuring salt and spices in inexact pinches rather than precise grams or ounces. (Baking is a slightly different matter.)

Of course, this same dichotomy is occurring in medicine and many other fields, and its resolution or meld through peaceful coexistence may be one of the defining challenges of the 21st century.

An existential hue surrounds this debate, and was well-known to the ancient poet who said, “What is man, that you should be mindful of him?”