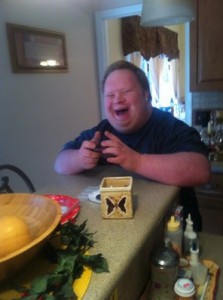 A young man with Down syndrome has died at the very hands of the police he idolized, the Washington Post reports. The death of Robert Ethan Saylor, aetat. twenty-six, occurred while being handcuffed with at least three set of cuffs as he was being taken by three deputies from a theater in Frederick County, Maryland. Previously he had been confronted, the Post said, for refusing to leave a movie after it was over.

“Late last week, the Chief Medical Examiner’s Office in Baltimore ruled Saylor’s death a homicide as a result of asphyxia. Since then, the case has ignited the fears of parents of children with Down syndrome, caught the attention of advocacy groups and left one family questioning how a young man who loved learning about criminal investigations could become the subject of one.

“Denny Weikert, president of the Frederick-based Family Resource, Information & Education Network for Down Syndrome, said his organization has not previously encountered problems with law enforcement agencies. But since Saylorâ€™s death, he said, he has been fielding calls from concerned organizations across the nation asking for guidance. Weikert said board members plan to meet and will issue a statement this week.

“Julie B. Cevallos of the National Down Syndrome Society said, ‘This incident is of course scary and upsetting to our community,’ adding: ‘With law enforcement, any misunderstandings are particularly risky, and we certainly hope that abuse is not tolerated.'”

There are neck problems some children (and adults) with Down syndrome have are due to what is called atlantoaxial subluxation, according to Mednet:

“The Special Olympics requires a participant with Down syndrome to have spinal cord X-rays to screen for AAI. Individuals with no symptoms but with X-ray evidence of AAI are banned from participating in several activities that are thought to have a particularly high risk of spinal cord injury—in particular, gymnastics, diving, the pentathlon, the butterfly stroke and diving starts in swimming, the high jump, soccer, and certain warm-up exercises.”