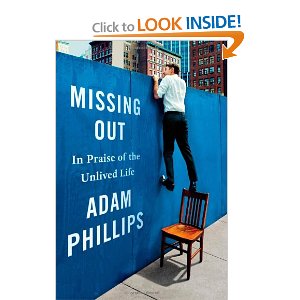 Are you fulfilling your potential? Or is it OK to be "Missing Out"?

The current February 25, 2013, issue of The New Yorker contains a review of UK psychoanalytic-writer Adam Phillips’s latest book Missing Out: In Praise of the Unlived Life.

The always-interesting Joan Acocella gives and takes in her notice regarding Phillips’s “invitation” to consider Freud as a philosopher. “Phillips loves Freud. He cites him again and again. But his Freud sometimes doesn’t look much like the Freud we knew….’Freud’s work is best read as a long elegy for the intelligibility of our lives. We make sense of our lives in order to be free, not to make sense.’…Phillips’s condescension to the anti-Freudians has not endeared him to them. Symmetrically, he is also unpopular with the Freudians, who feel he has blurred the great man’s principles and dishonored them.”

(Phillips was a literary scholar, lured into analysis by the work of D. W. Winnicott; and is the editor of Penguin Modern Classics’s 2002-06 edition of Freud, intended to supersede James Strachey’s “Standard Edition” in twenty-four volumes [1953-74], even though Phillips does not have a grasp of German.)

Acocella’s ambivalence again breaks thro her closing observation. “[Phillips] wants us to be more childlike, in a way, almost pre-moral. He wants us to be more impressionable, curious, naive. This is not a world-shaking philosophy of life. It is pretty modest, but, again, he tries to be modest.”

AMHF applauds the discovery of any thoughtful, mainstream writing (and reviewing) on psychoanalysis. Phillips, a facile writer, scholar, and speaker, is the author or editor of some twenty-five books.