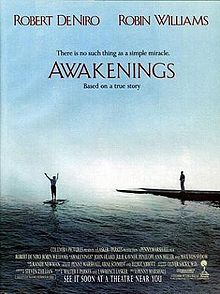 Fictionalized and based on the work of world-renowned neurologist and epilepsy expert Dr. Oliver Sacks

Where does the study of neurology leave off and that of psychiatry and psychology begin? (After all, Sigmund Freud was a neurologist.) Do we understand the intermingling of memory and time? What is “real” and what is “perceived”? What are some of the challenges of the aging consciousness?

Here is film number fourteen, “analyzed” in the AMHF series of twenty-one on subjects and themes relevant to its mission.

In abbreviated form, Wikpiedia summarizes this movie, based on Oliver Sacks’s 1973 memoir of his work at Beth Abraham nursing home in the Bronx. Awakenings tells the true story of British neurologist Oliver Sacks, herein fictionalized as American Malcolm Sayer (Robin Williams) who, in 1969, discovers beneficial effects of the then-new drug L-Dopa.

Administered to catatonic patients who survived the 1917-28 epidemic of encephalitis lethargica, Leonard Lowe (Robert De Niro) and the rest of the patients are awakened after decades of catatonia. They are in turn challenged with a new life in a new era.

The film was nominated for three Academy Awards.

With these real-life elements of Brigadoon, Awakenings depicts the eternal power of the mind caught in time: memory. For its depiction of an institutional setting, it may be compared and contrasted with, for example, One Flew over the Cuckoo’s Nest.

Oliver Sacks, whose latest book on Hallucinations was reviewed in this blog in November 2012, is a lucid reporter of eccentric and even bizarre behavior often associated with unusual neurotransmission, the internal-electric storms of temporal-lobe epilepsy (TLE), and other brain-related medical phenomena: distortions of the moral code or breaking standard social boundaries thro no fault or means of self-control of the patient; a hyperbolic emotional life; or the experiencing of vast spiritual preoccupations or ecstasies—hyper-religiosity for example. The Man Who Mistook His Wife for a Hat, an earlier work by Sacks (as Awakenings is) describes the foggy states of aphasia and other fugue-like conditions that impinge on mental stability—often (and not unreasonably) mistaken for manic-depression, bipolar disorder, or even psychotic breaks.

The development of new drug therapies is another significant theme.

The film also gives hope for patients with refractory or hopeless conditions similar to what possibly held Socrates in thrall: catalepsy or full-out comas. As the population in the West ages, with lower birthrates and the magic of modern medicine extending life-expectancies, the issue of elders coping in modern times is another important element brought into high relief in this simultaneously entertaining and profound film.