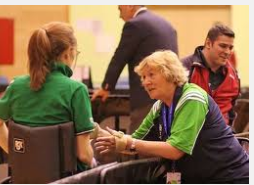 It has always been a concern for parents of the developmentally disabled or children with other handicaps: what will happen when the parents die. Now that life span of many of these individuals has increased, there is even a greater focus on the lives of adults who may in older age become “orphaned” by the deaths of their natural parents.

There is another reason for this concern—in the past, the long-term placement for many special needs persons was secured by childhood or adolescence. The large state developmental centers, often domiciling 4,000 or more people, served as lifetime placements from childhood, or even birth, to death.

With the changes brought on in the 1970s by the various Willowbrook decrees, people with special needs now live more frequently near their homes and attend community programs. While this is an attractive ideology, it often neglects the glitches occurring when children and adults move, or “grow” into another program, and the agonizing of parents, frequently hidden even from the closest service providers.

Many parents try to “lock in” their children to a program upon their child’s entering young adulthood. While this has advantages, especially if the now-young adults needs a structure that can’t be provided at home. But for many individuals, their needs are best met at home, with their families. Group homes and other settings must not become “orphanages for the retarded,” as one person with Down syndrome commented.

David Bornstein, in the June 26 New York Times, writes about a man in Vancouver, BC, whose son has severe and uncontrolled seizures, as well as other problems. He worked with an agency called PLAN-Planned Lifetime Advocacy network–to develop a long-term plan for his son:

PLAN helped Kuntz prepare a long-term care plan for Josh and build up a network of support, which included other parents of children with disabilities. This is unusual. Families of people with disabilities often “exclude other people because they think it’s a burden,” explained Eddie Bartnik, the mental health commissioner of Western Australia, who has been a longtime champion for a network- and relationship-oriented model of care. “Rather than widen things, they narrow them. This creates a huge vulnerability.”

Kuntz found that people wanted to help if they knew there were others they could count on, and they wanted to hear about Josh’s life: his visits to Costco, his pleasure playing with kids, his enjoyment of a restaurant meal. “When I went back to people in my family and said, ‘This network is part of our care plan, the responsibility is shared, each of us brings a piece, you don’t have to do all of it’ — I found somebody who agreed to be Josh’s guardian.”

Today, Kuntz has taken this online, using a social-networking site called Tyze, which is designed to facilitate support networks for vulnerable people. He says the tool makes it much easier to keep friends, relatives and caregivers informed about Josh; coordinate responsibilities and roles; send messages, requests and invitations; and store care plans, financial information, advance directives and legal agreements in an online “vault,” to be accessed or shared as needed.

As a new and creative ideal, PLAN appears to have great potential; with time the glitches and unforeseen consequences can be overcome.