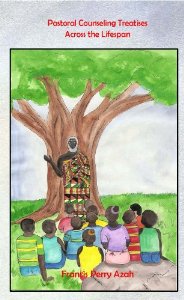 On our AMHF blogs we have tried to feature information about where the Venn diagrams of spirituality and counseling intersect. It seems peculiar that many religious people–from many religions–are reticent to link the spiritual resources and traditions of their faith with modern psychology and psychiatry. When people are depressed, psychotic, or anxious, there is a need to involve all helpful resources. A new book by Father Francis Perry Azah–Pastoral Counseling Treatises Across the Lifespan” who is also a pastoral counselor, beings together approaches that have too often been kept separate. He writes:

“The clergy are called upon to play many roles in modern society–to be priest and prophet, administrator and pastor. Within each of these there are many specific and demanding areas of expertise. One pastoral role ever in demand is that of a counselor, the one to whom turns at life’s moments of distress, despair, and decision. This is not a new role for clergy. The priest and healer, historically, have a common ancestor in the ancient shaman, the one to whom people came seeking wisdom and health.

“To define pastoral care, it is pertinent and proper to dissect and to reflect while on these two words” PASTORAL is an adjective, qualifying the noun CARE. Pastor is a noun coming from pastoral, hence the role of shepherd of the flock. It can be said that a shepherd is one who has the spiritual care of his or her persons entrusted to his charge.”

Father Perry’s book offers an examination of pastoral counseling theories and approaches which touch on all ages and phases of the human lifespan. The chapters include these topics: the modern search for personal meaning; psychological and spiritual unfolding of the identity of the human person; violence against women and children; dialogue between Christian and Jewish Religions as affecting educational processes; theories of human growth and development; counseling theories; dynamics of pastoral counseling; and reflections on family therapy. He provides a touching personal Credo of Pastoral Counseling:

“I believe in Pastoral Counseling as an important discipline for human growth and development, therefore, I will strive to bring the love of God into the life of people by listening and understanding them through empathy. I will strive to reflect more of their feelings so that they may be grounded in self-awareness and be in touch with their spirituality and wellness.

“I believe in theological competency, therefore I will take advantage of every opportunity to learn about various ethical issues in pastoral care and counseling. I also attempt to learn about the various religions, their belief systems and implications for effective pastoral care and counseling. In other words, instead of preaching or imposing my own world views or specifically theological thoughts and values upon others, I will help those from different faiths to understand their problems better within their own religious structures.”

In the tradition of William James, Karl Menninger, and Robert Coles, Francis Perry Azah brings us a pioneering work on the manner in which pastoral counseling may help suffering persons at different stages of the lifespan. If you are interested in this topic, it is a book worth reading.