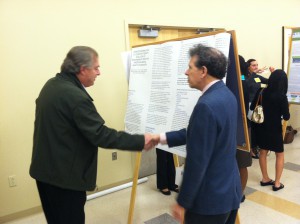 The high-energy meetings of the New England Psychological Association (fifty-third annual conference of NEPA) and Northeast Teachers of Psychology (NECTOP) provided much inspiration among the many fine papers delivered (the unforgettable keynote speaker Friday evening, October 18, was Daniel L. Schachter, Ph.D., of Harvard University, on “The Seven Sins of Memory”; another attended, the following morning, was by nationally renowned Kelly D. Brownell, Ph.D., newly of Duke University, asking “Does Psychology Have a Role in Changing the American Diet?”)—particularly during the all-day Saturday Poster Sessions.

Some of these outstanding displays included:

“Are Women Their Own Worst Enemy? Implicit Stereotypes and Their Effect on Performance Evaluations,” by Chelsea Hadrich of Stonehill College

“Email Stress and Personality,” by Louise Hviid and Marcel Kinsbourne, M.D., of The New School for Social Research

“A Film Is Worth a Thousand Words” (on the death penalty), by Suzanne Mannes, Ph.D., and Raphael-Adrian Ingaglio II of Widener University

Such represent the tip of the iceberg.

We plan to be inspired and vitalized by all of you (and many others) again, October 17-18, 2014, at Bates College, Lewiston, Maine.