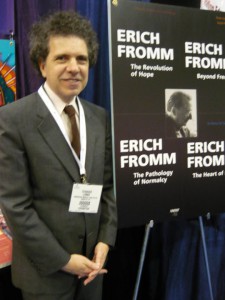 American Mental Health Foundation Books, the publishing division of the foundation, was established five years ago today. Then in its 85th year of service dedicated to the welfare of people with emotional problems, AMHF has since been the proud publisher (as the accompanying photograph from BookExpo America indicates) of four titles by the incomparable Erich Fromm (1900-1980). Two are reissues of classics, two are never-before-published collections. All AMHF books by Fromm (et al) are also available as Kindle editions, and can be ordered via this link, which takes you to other AMHF titles: by Drs. Stefan de Schill (whose Psychoanalytische Therapie in Gruppen can be downloaded in its entirety here), Raymond B. Flannery Jr., Gavins and James Campbell Quick, and last but not least Henry Kellerman, whose latest book Anatomy of Delusion will be officially published March 24, 2015. It is already available via Kindle. In 2015, AMHF will publish the results of its comprehensive two-year study, with Astor Services for Children & Families on youthful signs of schizophrenia and other psychoses as well Kellerman’s There’s No Handle on My Door: Stories of Patients in Mental Hospitals. There will also be a reissue of his Group Psychotherapy and Personality: A Theoretical Model. American Mental Health Foundation Books: another way AMHF, at 90, continuously builds a more compassionate society. It’s all happening here. Buy our books, take one of our Webinars: support our efforts as 2014 comes to a close.