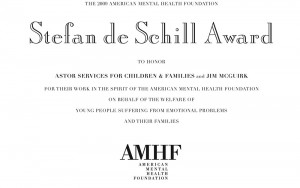 Director of Research of AMHF between 1948 and 2005, Dr. Stefan de Schill died February 9 ten years ago. That date was also Ash Wednesday.

De Schill was one of the pioneers of group psychotherapy. He accepted the position of director of research offered by Hermann Broch, then chairman of this foundation while at Princeton, and one of the lights of 20th-century Austrian literature.

AMHF keeps de Schill’s memory alive via its mission and publishing program, which offers Crucial Choices—Crucial Changes for sale, and his earlier works, classics in the field, edited and written, are all accessible on this Web site free of charge.

There have been two Stefan de Schill Awards given to outstanding organizations, to support and continue their work in the spirit of de Schill: Astor Services and Suicide Prevention Initiatives. (AMHF continues its association with Astor via a significant two-year study, just completed and ready for publication in a year, during the first part of 2016, on early identification and preventive care for psychotic disorders in children.)

There have been several seminars held at the FDR Library and Estate in Hyde Park, also in de Schill’s name.

Difficult to believe February 2015 is ten years since the death of this master psychoanalyst and U.S.-nonprofit visionary.