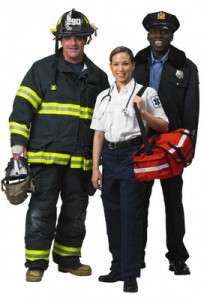 Image by and copyright Tom Grill/Corbis

Fighting fires is a war that never ends but this had been a bad week.

Ladder 6 had been called to a motor-vehicle accident on Monday afternoon. In the passenger’s seat had been a young mother. On impact she was thrown through the windshield and was now impaled on the dashboard. Her young son strapped into a car seat in the rear had been thrown to his death on the concrete sidewalk to the right. Blood was everywhere. As they worked the Jaws of Life to free the impaled corpse, blood still oozed from what had been the face of the mother.

Today was Friday, a windy Friday morning at that. The call had come for a four-alarm fire in a multiple dwelling unit. An elderly couple had died from smoke installation. A teenager jumped from the roof, fell on his head and was killed instantly. A member of the Ladder 6 crew was working the third floor when windswept fire engulfed him. He had no choice but to jump. He will live but his spinal cord was severed.

How do you cope with this? Really, how do you wrap your mind around such events?

The Need
Our country has become fully aware of the number of our returning veterans who have psychological training and posttraumatic stress disorder (PTSD) with its various symptoms and behavioral disruptions. When this need was brought to the attention of its citizens, those citizens supported the funding of additional resources for those veterans in need.

However, the general public is, as yet, generally unaware of a second group of individuals that serves the local communities at home but that also include a number of individuals with psychological trauma and PTSD.1

This group is comprised of first responders, those who run toward the critical incident when the rest of us are running in the opposite direction. In this essay, first responders include police, firefighters, and paramedics.

There are several reasons why their mental-health needs remain unknown. As a group, first responders are action-oriented, self-contained, deferential men and women for whom “complaining” is not acceptable behavior and for whom seeking counseling for mental health issues arising from the aftermath of one’s work is not likely ever thought about. Even if first responders chose to seek counseling, there is often very little time before the next call with more traumatic aspects is responded to, as our opening case example suggests. Unfortunately, in the absence of treatment some self-medicate the traumatic aftermath with substance abuse and become less likely to reach out for help. Finally, all of us, including the media, are so used to seeing first responders come immediately to the critical incident that the media focus on the direct victims of the incident and do not realize the impact of these same events on the first responder community onsite. Hence, there are less treatment resources and research on intervention strategies for first responders.

Psychological Trauma and PTSD
Psychological trauma is a person’s physical and psychological response to experiencing, witnessing, or being confronted with event(s) that involve actual or threatened death, serious injury, or threats of bodily harm to self or others.2 One can be victimized by direct acts, witnessing violent events happening to others, or hearing about traumatic events directly from victims. First responders are at risk of all three types of situations. The published literature documents the development of psychological trauma anywhere from 6-to-22% of first responders called to a critical incident.

Psychological trauma results in disruptions to the three domains of good physical and mental health: reasonable mastery of one’s daily activities; caring attachments or social support from other colleagues, families, and friends; and a meaningful prosocial purpose in life, a value and reason to invest energy in the world each day. Traumatic events shatter one or all of these domains.

In addition to the three domains, there are three sets of trauma symptoms. These include the physical symptoms of exaggerated startle response, hypervigilance, and mood irritability; the intrusive symptoms of memories of the event in the form of conscious intrusive memories, nightmares, and flashbacks; and the avoidant symptoms of avoiding the scene of the incident, a gradual withdrawal from other life activities, and a feeling state of emotional numbness. If the disrupted health domains and/or any of the three sets of symptoms are present after 30 days, the individual has developed PTSD, a condition that will last until death, if it is not treated. (These materials have been discussed in greater detail elsewhere2 and the interested reader is referred there.)

Treating Trauma in First Responders
To date, much of the scientific focus on treating trauma has focused on the needs of victims of combat and rape. A basic approach has been to utilize one basic counseling approach such as cognitive behavior therapy,3 and, if needed, a second intervention, such as medicine and some form of relaxation exercises. This approach has worked for some victims but not all victims. This approach is even more problematic for first responders, as they are not apt to discuss the psychological distress. If anything, they might speak about the physical symptom of hypervigilance on subsequent calls or the avoidant symptom of wanting to quit. The treatment interventions noted above are not targeted symptoms approaches with the end result that many first responders stop treatment.

This essay proposes a multi-modal psychological trauma approach for first responders in which there is a specific treatment intervention for any of the three disrupted health domains or any of the three sets of disordered symptoms. Psychological trauma and PTSD may disrupt the health domains of reasonable mastery, caring attachments to others, and a meaningful prosocial purpose in life and victims of trauma may exhibit physical, intrusive, and avoidant symptoms. (See 2,4 for a detailed discussion of psychological trauma and PTSD). Below are some examples from the emerging empirically based individual studies and literature reviews of empirical-based research. All references are listed in full elsewhere.1, 3, 4)

Caring Attachments: First responders tend to talk to one another about the specifics of an event but discuss less the feeling states that it generated. Overall, social support from colleagues and supervisors has proven beneficial and some group counseling approaches have enhanced this sense of a supportive social network. To date, the primary intervention for restoring a meaningful purpose in life has been CBT counseling [3]. CBT has been effective for some first responders but not others.

Symptoms: The research findings here are limited and this is important since first responders, if they ask for help at all, will most likely seek assistance for symptom disruptions. Antianxiety and antidepressant medications with and without relaxation exercises have proven helpful for the physical and intrusive symptoms. CBT has also been helpful to some responders with intrusive symptoms. There has been no study addressing avoidant symptoms in first responders.

Implications for First-responder Treatments
As the research cited in this essay suggests, psychological trauma and PTSD in first responders is a widespread and generally neglected issue. A first step in addressing this problem is for increased public awareness through enhanced media coverage, possibly including interviews with first responders post-incident. As public awareness increases, research monies for assessment and treatment will increase as well. Clinicians need to report on how they have tapered treatments to the specific needs of first responders and the field would benefit from the academic community conducting major studies of various single and combined treatment interventions with large numbers of first responders dealing with trauma/PTSD. A detailed methodological critique of the research to date may be found elsewhere.1

The issue of substance abuse will need to be addressed in both individual and group treatments. When first-responders self-medicate to manage symptoms, both the psychological trauma and substance abuse need to be addressed jointly for recovery to be effective. For example, if a first responder becomes sober, the physical and intrusive symptoms will return in intensity. Without any other form of trauma intervention the first-responder will likely return to self-medication.

First responders are a population at high risk. The development of successful multi-modal interventions will reduce needless human suffering and enhance the care and safety of our communities, as first responders continue quietly to go about their important work.

Raymond B. Flannery Jr., Ph.D. FAPM, is Associate Professor of Psychology, Department of Psychiatry (Part Time), Harvard Medical School, as well as Adjunct Assistant Professor of Psychiatry, University of Massachusetts, and is an internationally recognized scholar and lecturer on the topics of violence, victimization, and stress management. Dr. Flannery is available for lectures and workshops for all types of groups, and may be reached at the American Mental Health Foundation. 212-737-9027 or Email Evander.