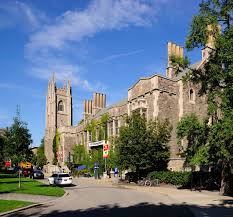 One of the top-20-ranked universities in the world, the University of Toronto responds to mental-health needs on campus.

The Winter 2016 issue of the University of Toronto—where I did graduate work forty years ago—alumni magazine features an article on the college response to a rise in mental-health needs among its students. In an evermore diverse society, in a faster-changing culture amid the brave new world of social media, college-aged students in North America are under more psychological pressure than ever. Perhaps ironically, the old go-it-alone approach only fosters greater isolation and depression.

I hope readers of this blog will want to access an October 2014 report from U of T. It is an eye-opening “New Strategy for Student Mental Health.”

It is worth noting a dimension of this “new strategy” encompasses many of the group-therapy advances devised by Dr. Stefan de Schill over his long study and practice of group psychotherapy under the auspices of this foundation.

The alumni-magazine article is researched and written by Cynthia Macdonald, a 1986 graduate of St. Michael’s College, U of T.

“In the past five years, the university has seen the number of students registering at Accessibility Services with mental health as their main disability almost triple. Data from the 2013 National College Health Assessment survey, which polled 30,000 students across the country [Canada], is sobering: almost 20 per cent said they’d experienced depression in the previous year; almost 30 per cent reported anxiety and almost 40 per cent said they were stressed

“This is why mental health is becoming such an important issue on campus today….Students are coming up with creative, grassroots solutions on what seems like a weekly basis.

“Lucy Fromowitz, U of T’s assistant vice-president of student life says,…'[Y]ears ago, students who had a first episode of mental illness while in university may not have completed their studies. Now that’s changed….We can ensure that a student in extreme distress sees a psychiatrist that day.’

“In the past six years, [Erin] Hodgson [BSc 2012, St. Michael’s, profiled with OCD and depression in the article] has spoken to tens of thousands of young people; whenever she shares her story with them, she gets dozens of stories back. ‘Why have we been silent for so long about this huge part of the human experience, one that all of us share?’ she asks. ‘All of us have bad times, and go through stress and loss. Everybody struggtles. It shouldn’t be taboo to talk about that.'”

The University of Toronto Student Mental Health Strategy and Framework recommends the university take a “systems approach” to mental health—focusing not just on health and wellness services and programs but also on ensuring that conditions throughout the entire university enable students to flourish. “A systems approach looks at the whole student,” says Jill Matus, chair of the committee, “and recognizes that different supports are needed for different students.”