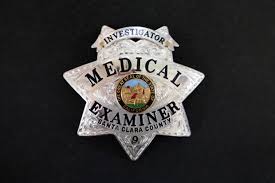 Some physicians are also coroners, and they are known as "medical examiners."

The day dawned bright and sunny with typical early spring Florida warmth. People began to wake up, and each person began to plan the day. Everyone left home for work, for school, for local errands. Some did not realize that they would never be returning home. Ever.

Each sat patiently under the new university pedestrian bridge waiting for the traffic light to change. There was a sudden loud sound: a crashing down of 950 tons of concrete and steel from what was the new pedestrian bridge above…then, darkness.

First responders searched frantically for survivors in the cars crushed beneath the rubble. Cadaver dogs, acoustical soundings, shouts from first responders sought out the living. An overhead crane was brought in to remove the concrete slabs in hopes of finding victims still alive in the mangled cars below. So badly mutilated were some of the bodies that they were not recognizable. The crushed cars with their crushed human remains still in them were placed on tow trucks and taken to the morgue, where coroners would try to identify the deceased from dental records and DNA analyses.

Medical research has shown that first responders to critical incidents may develop posttraumatic stress disorder (PTSD), and its presence in first responders occurs at a higher incidence than in the general population as well as among military veterans returning from active combat. (1,2) The published first responder research has in general included police, firefighters, and paramedics as subjects.

However, there is another group of first responders that has received much less attention. This group is comprised of the coroners who attend the deceased during critical incidents, such as the bridge failure described above. The qualifications for coroners vary from state to state, but coroners are responsible for retrieving the deceased from the site of the critical incident, determining the cause and manner of death, arranging for proper burial, and reporting findings to family survivors and various civil and legal entities. In many cases, autopsies are performed in assessing the cause and manner of death. (3)

Autopsies are performed by physicians. Some physicians are also coroners and are known as medical examiners. The work is technically exacting and may be emotionally painful for coroners. (Undertakers respond to those who have died from natural causes and are not usually present during critical incidents.)

The critical incidents that coroners respond to are among the most hideous and difficult of situations. Common examples include grisly murders; multiple fatalities; child homicides; natural and manmade disasters; violent deaths of persons known to the coroner; and working with bloated, mutilated, decomposed, and/or dismembered bodies. Deaths of children and interacting with distressed family survivors are often the most difficult of encounters.

The presence of possible PTSD in coroners is not surprising.

Whereas the research is limited, it clearly demonstrates that coroners are subject to developing PTSD.

Coroners with PTSD would benefit from the PTSD efficacious interventions employed by other first responder groups. (2) Untreated psychological trauma becomes PTSD after 30 days. (1,2) Both trauma and PTSD may disrupt the domains of good physical and mental health: reasonable mastery, caring attachments, and a meaningful prosocial purpose in life. Both may also include the physical, intrusive, and avoidant symptoms associated with these conditions. (2,3)

Helpful interventions for restoring mastery include the development of the skills of stress-resistant persons (4) and reviewing protocols as well as team interactions prior to critical incidents as a means of reducing the impact of the event on the first responder.

Caring attachments may be strengthened by individual and group discussions and support from supervisors for demonstrated skills. Given that traumatic events are difficult by nature, first responder chaplains may be of assistance in developing an understanding of such painful events and restoring a renewed sense of prosocial meaning. Physical symptoms due to an adrenaline rush may be reduced by aerobic exercises, mindfulness exercises, and/or the short-term use of anti-anxiety medications. Intrusive symptoms in the responder’s memory will often respond to cognitive behavior therapy (3) and/or antidepressant medications. Avoidant symptoms are often best addressed by discussions of the situation being avoided and gradual re-exposure to the site in small steps. These and other interventions (1,2,3,4) are often helpful for the first responder community.

Coroners’ work with distressed families deserves special attention. Family survivors may be extremely depressed, highly anxious, or angry and the coroner may become the direct focus of these feeling states. One helpful approach to this issue would be to train coroner personnel in the counseling skills utilized by the Assaulted Staff Action Program (ASAP) (5) for dealing with the psychological aftermath of violence. Coroners could employ these skills in their work with distressed families and then employ these counseling skills for their own work-related needs.

There are other at-risk groups such as television and radio reporters, TV-news camera personnel, insurance-claims staff dealing with distressed families, among others, and these groups need to be assessed as well going forward. In the meantime, the various coping skills noted above will work to reduce the PTSD in coroner first responders and improve the quality of their work in the communities that they serve.