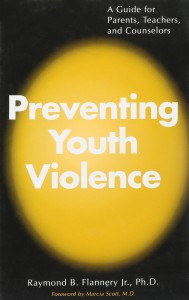 Twenty years ago I published a book on a topic of national concern: preventing youth violence (Flannery, 2012a). The American Mental Health Foundation (AMHF), with its emphasis on improving mental-health awareness, requested I write two blogs (herewith, in 2019, are these two new essays) on some of the topics in the book.

The first blog, from September 2011, reviewed the potential warning signs. They have been the same for 125 years. I arranged these warning signs on a continuum of severity: early, serious, and urgent warning signs.

Good physical and mental health requires reasonable mastery (the ability to shape one’s environment to meets one’s needs); caring attachments to others (for companionship, emotional assistance, and instrumental help); and a meaningful prosocial purpose in life (that serves the needs of the individual and society in beneficial ways). In youth violence one, if not all, of these domains are disrupted and are reflected in the warning signs.

The early warning signs in fact reflect immediate disruptions in these domains. They include disrupted attachments at home, in school, and the community; disrupted mastery in the spheres of personal self-care, interpersonal-skill development, and academic mastery; and disruptions in the development of a prosocial value system.

The second blog set out a series of five treatment-interventions steps. These included securing safety for all, restoring attachments, restoring mastery, a series of medical and psychiatric issues that would likely require additional resources, and lastly instilling in the child a meaningful prosocial value system. The interventions may be utilized with assailant children of all ages. This includes those assailant youths who are required to complete court-ordered sentences. Most of these assailant children were themselves victims of violence before age six, though they usually do not become violent and aggressive until adolescence.

The intent of the first edition, Preventing Youth Violence, was to address these abused children before they reached the age that they became violent. Ministers of all faith-traditions, many teachers, the policing community, and various preschool programs have demonstrated the important of addressing the needs of abused children early on.

However, the needs of many abused children were not addressed and we still have unacceptable levels of youth violence. To address this ongoing need, researchers and clinicians in the field of youth violence in connection with major advances in technology like neuroimaging have made significant progress in our ability to understand and treat violent youth.

In the two decades since my book was issued, there have been four significant advances: in utero negative impacts, brain neuroimaging of adolescent brains, development of the Adverse Childhood Events Scale (ACE), and the important role of toxic stress.

There have also been major advances in three areas addressed in the first edition: greater understanding of PTSD, the impact of substance abuse, and the continuing importance of caring attachments. The present essay addresses the four new advances. Part 2 reviews the three major new advances as well outlining updated treatment considerations.

In Utero. The first new area of research is built on the findings of the caring attachment between mother and child. Researchers asked themselves if the mother-child bond was so important at birth could the mother’s psychological states during pregnancy also impact the development of the embryo? In short, the answer is yes. Dr. Verny (1981), a physician, wrote an early review of some of the basic findings, and subsequent studies have confirmed these initial findings.

When a pregnant woman has been exposed to toxic stress (see below), the fetus may be premature or of low birth weight. If the neonate survives, he or she faces the possibility of developmental delays, anxiety, depression, and becoming a social loner.

The Brain. Recent advances in neuroscience have enhanced our understanding of how the adolescent brain develops. There are four main parts of the brain: the old brain stem, the limbic system, the cortex, and the prefrontal cortex. The old brain stem forms first. It sustains life and regulates wakefulness, sleep, hunger, thirst, heart rate, and so forth: the essentials needed to sustain life. The limbic system is an important center for feelings. Happiness, peace, anxiety, depression, fear, anger, rage are located in the limbic system. The third part of the brain is the cortex, the layer of brain-tissues just underneath the scalp. The cortex takes in sensory information through the senses (e.g., hearing, seeing, smelling, and so forth) and carries messages to various parts of the body about what to do (e.g., run away, speak up, cry). The fourth part of the brain is the prefrontal cortex, which is the center for rational thought, problem-solving, and value-informed decisions. The cortex sends its sensory information to the prefrontal cortex, the prefrontal cortex makes a decision about what to do, and the cortex then carries that message to the part(s) of the body that need(s) to be involved in the solution. The prefrontal cortex matures largely after birth and is not fully formed until about age twenty-five.

The adolescent brain has a fully formed limbic system with several strong emotions but no fully formed prefrontal cortex with the benefit of life-experience and mature decision-making. Thus, adolescents engage in impulsive acts, such as using alcohol and drugs, having unprotected sex, and restless driving. These behaviors often result in death, injury, and manifest themselves in the various forms of youth violence.

Adverse Childhood Events (ACEs). The Kaiser Permanente Health Plan in California, began to note that some of its patients were developing somatic illnesses far earlier than normal aging would predict. To answer why, Kaiser partnered with the Centers for Disease Control (CDC) and created a ten-item questionnaire that assessed family problems, such as parental domestic violence, parental substance abuse, and family mental illness. The results were surprising. Scores of four or more of these adverse childhood events were associated with the early onset of the somatic illnesses before normal aging would predict. Further research on violent youth revealed that these assailants also had scores of four or more adverse childhood events. Nonviolent youth scored lower on adverse events.

Toxic Stress. Every human life encounters (Flannery, 2012b) this. The affected individual solves the problem as best as he or she can and moves on in life. However, there are particular stressful situations that occur regularly or intermittently on a consistent basis, situations that are not readily resolved. Poverty, homelessness, substance abuse, domestic violence, and exposure to adverse childhood events are examples of some problems that are not easily resolved. This toxic stress in youth is associated with somatic diseases, psychiatric disease, and youth violence in children with adverse childhood events.

This concise survey, of the four new areas of understanding youth violence, is presented in greater detail in Flannery (2021). Part 2 of these companion essays (noted above) addresses the three areas of enhanced understanding since publication of Preventing Youth Violence and includes the treatment implications that follow from the findings in both of these blogs.

Raymond B. Flannery Jr., Ph.D., FACLP, a licensed clinical psychologist, is Associate Professor of Psychology (Part Time), Department of Psychiatry, Harvard Medical School, as well as Adjunct Assistant Professor of Psychiatry, Department of Psychiatry, University of Massachusetts Medical School and Adjunct Professor of Psychology (Part-Time), the Woods College of Advancing Studies, Boston College. He is an internationally recognized and award-winning scholar and lecturer on the topics of violence, victimization, and stress management. Dr. Flannery is available for lectures and workshops, for all types and sizes of groups, and may be reached at The American Mental Health Foundation.