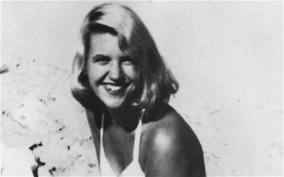 Sylvia Plath: Author of a film, not yet in release, based on her celebrated autobiographical novel

This is the final blog in the AMHF series of twenty-one films relating to “Hollywood and Psychiatry.” These blogs have taken us from ca. 1921, and the release of silent classic The Cabinet of Dr. Caligari, a mere three years before The American Mental Health Foundation was organized, into the twenty-first century. The first blog written is on Don Juan DeMarco and the most recent, Girl, Interrupted.

The films under review range from satire and sports to horror, suspense, an old-time serial, and tragedy: from technicolor blockbusters to black-and-white B-pictures.

They cover an array of themes of utmost concern to the philanthropic-research mission of AMHF: adolescence, depression, ECT, bipolar disorder, suicide, DID, public policy, schizophrenia, individuals with special needs, and elders.

This is also the 450th blog on the AMHF site since its considerable expansion in 2008.

I am winding up the series by discussing a film in development. In fact, The Bell Jar was scheduled for release in 2012. Technically, if and when released, it will be a remake of a 1979 movie starring Marilyn Hassett and Julie Harris.

The film is based on the thinly disguised-fictionalized memoir of Sylvia Plath. Originally using the pseudonym Victoria Lucas, Plath wrote of her experiences as the literary and fashion-plate “It Girl” in 1950s New York. By using a pseudonym as other autobiographical writers have done before (William Hale White, a Victorian writer in the manner of George Eliot, for example, used the name “Mark Rutherford” for his Autobiography of Mark Rutherford), Plath further distanced herself from the unforgettable heroine of The Bell Jar: Esther Greenwood.

Beginning in what Esther calls the summer of the Rosenbergs (technically, the electric-chair execution took place in late spring), the tale centers on the narrator’s own encounters with ECT. The book is an intense chronicle of a breakdown and a chilling presage of Plath’s suicide. She was and is one of the greatest poets produced by the United States. Like the life and death of Virginia Woolf, Plath’s is a cautionary tale.

This story includes themes encountered in One Flew over the Cuckoo’s Nest, An Angel at My Table, and the aforementioned Girl, Interrupted.

Of course, it is impossible to review a film that does not exist. But I want to leave readers of these blogs, particularly women readers, not on a note of judgment (for who am I?) but with a word.

Plath’s poetic genius is to be admired, aspired to, and sometimes emulated. The demons of her talent eventually destroyed her. Out of a poetic love of life and everything she saw, she yet committed the ultimate act of self-loathing and hate. Plath clearly found no other way out from her emotional turmoil. Her death, at much-too-young-an-age, essentially left the world a worse place for the work she would have created and the people she would have further inspired. “Lady Lazarus” as Plath mockingly referred to herself in one of her greatest lyrics, was at the top of her game as a poet; and the wound of her death has not healed even more than half-a-century later.

Below, as best I can determine, is a trailer for the film that, at present, has no need of a trailer.