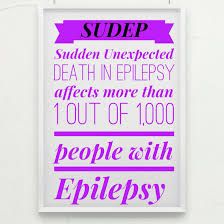 The emotional toll of the little-understood Sudden Unexpected Death in Epilepsy (SUDEP) on caregivers is explored.

This essay has been prepared in consultation with Evander Lomke, president and executive director of The American Mental Health Foundation. It is posted in memory of Elizabeth Leah Lomke, September 19, 1986 – June 4, 2018.

The medical community and the general public are fully cognizant of the unexpected death of otherwise apparently healthy infants, a condition known as SIDS (Sudden Infant Death Syndrome). The cause of SIDS deaths remains unknown, but the introduction of SIDS risk management strategies for infants has resulted in a dramatic reduction in SIDS deaths [1]. These strategies have included placing the baby on his or her back during sleep, keeping the baby’s head uncovered, and keeping the child smoke-free in utero and after birth. Immunization has not been found related to SIDS.

There is another medical condition that also results in unexpected deaths but is less well known in the general medical community and among the public. It is the sudden unexpected death among persons with epilepsy (SUDEP). These deaths are not related to trauma or to drowning.

The purpose of this essay is to provide a brief overview of what is known about SUDEP and to explore the grieving process common to both conditions.

Epilepsy is a disorder of the brain that clinically manifests by an abnormal and excessive discharge of neurons in the brain [2]. Epilepsy is internationally categorized into 3 groupings: (1) partial seizures (simple, complex, and secondary generalized), (2) generalized seizures, and (3) unclassified seizures. These categories include West, Lennox-Gastaut, and often Dravet syndromes that may be diagnosed in infants and young children [2].

Epilepsy appears to be increasing in prevalence. For example, in European countries, epilepsy was the twelfth-leading cause of death in 1992 but became the ninth leading cause of death in 2016 [3]. The incidence of SUDEP is less clear. In the United States, it is estimated that 1 or 2 deaths per 1,000 are epileptic-related. Other research has assessed the SUDEP rate as similar to or even higher than SIDS [4].

However, the true incidence of SUDEP deaths remains unknown for several reasons. Most SUDEP deaths are not witnessed, many physicians and coroners are not aware of this condition as a direct cause of death, in some jurisdictions epilepsy is not listed as a cause of death, and some neurologists/epileptologists choose not to discuss SUDEP with patients and their families/caregivers since they believe it is ethically wrong to give information about a possible complication that is not understood [5].

Although the biology of SUDEP is unknown, as noted, it appears to include disruptions in respiratory, cardiac, and brain functioning and is beyond the scope of this brief overview.

Not surprisingly, the risk management strategies for reducing the possibility of SUDEP follow from the established risk-factor research. These management strategies include good stress management techniques: a healthy diet, aerobic exercise, and adequate sleep; obtaining a cardiac work-up early on, utilizing prescribed medications or surgery to reduce the number of GTCS episodes; being in environments wherein CPR is available; and examining for possible cardiac and respiratory issues after seizures.

Clearly, from this brief overview there is an urgent need for research into both the risk factors and possible etiology(ies) of SUDEP. There is also the need for information about the risk of sudden death in persons with epilepsy for the general medical community, family members, colleagues, and the general public. Such a public campaign was successful in reducing SIDS [1] and may prove equally beneficial in reducing SUDEP incidents.

Common to both SIDS and SUDEP is the onset of grieving in surviving family members, colleagues, friends, and neighbors. Grieving is the normal process of adjusting to life in the absence of the deceased loved one. It may include feelings of shock, grief, sadness, yearning, emptiness, anger, and depression among others. It may also include temporary intrusive thoughts or images of the deceased and the avoidance of specific reminders of the loved one. Over time this adjustment process results in the resumption of one’s daily life and this adjustment usually occurs within a six-month period.

Grief that continues after six months is known as complicated grief (CG). CG may include continued longing for the deceased, a desire to join the deceased, anhedonia, persistent loneliness, and disruptions in work and social functioning before the final state of acceptance of the loss is reached. CG appears to occur in 10 percent of grieving individuals [6] and may be more apt to occur in persons with a history of psychological trauma due to other, previous losses [7].

There are a few known risk factors that may predispose some to the development of CG. These include female gender, a previously diagnosed mood disorder, low social support, high perceived stress, childhood abuse by parents, and emotional dependency on the deceased [6]. Prolonged grief has been associated with suicidal ideation and over time with medical problems, such as cancer, cardiac, and immune disorders. This may occur in part due to the under-utilization of medical services by persons with CG.

It is important to note that CG is not posttraumatic stress disorder (PTSD) nor major depression. CG can occur with neither and/or both, but all three are separate entities requiring specific interventions.

CG and PTSD have symptoms of avoidance behaviors and intrusive thoughts in common [6] but the reasons for each set of symptoms differ greatly. In CG, avoidance is used to forestall thoughts or feelings related to the loss; in PTSD, avoidance is utilized to prevent recurrence of the danger. In CG intrusive thoughts are of the deceased; in PTSD intrusive thoughts are of the traumatic incident. Finally, the primary feeling in CG is sadness, whereas the primary feeling in PTSD is fear. The grief associated with traumatic events is not the same as CG grief. CG and PTSD are not the same and the terms should not be used interchangeably.

Similarly, CG is not the same as major depression. In CG, survivors may continue to experience self-worth, retain emotional connections with others, and maintain some sense of positive feelings outside of the death. In major depression, however, the depressed person has low self-esteem, is alienated from others, has anhedonia, and experiences a sense of uselessness [5]. CG and major depression are not the same and often require two differing-treatment strategies.

Although these three experiences differ, each represents an increased risk for illness. Each person with CG requires a psychiatric assessment to rule in or out PTSD and/or major depression. Each of these three conditions requires its own treatment protocol.

Life presents a painful and difficult transition for survivors of SIDS and SUDEP. Not everyone will require medical care. For those who do there are efficacious treatment plans that can help to restore normal daily routines and emotional stability.

(Readers of this blog are encouraged to access the October 18, 2018, article, in Psychiatric Quarterly, of “SUDEP and Grief: Overview and Current Issues,” by Raymond B. Flannery Jr., Ph.D., FACLP, and Evander Lomke.)

Raymond B. Flannery Jr., Ph.D., FACLP, is Associate Professor of Psychology (Part Time), Harvard Medical School, as well as Adjunct Assistant Professor of Psychiatry, University of Massachusetts Medical School, and an internationally recognized scholar and lecturer on the topics of violence, victimization, and stress management. Dr. Flannery is available for lectures and workshops, for all types and sizes of groups, and may be reached at The American Mental Health Foundation: Email elomke[at]americanmentalhealthfoundation.org.