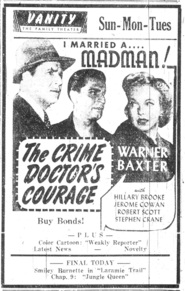 Clearly of B-film status, this series nevertheless says a lot about the social dimensions of crime and the psychology of the criminal mind

Counting all ten films in the Crime Doctors series as one, this is the nineteenth of twenty-one Hollywood films, from AMHF, devoted to images of psychiatry, psychiatrists, and psychology.

These (basically) one-hour films are in a time-honored, formulaic tradition. As comic-book writers fashioned superheroes with separate, mundane identities, so, a little closer to the workings of the Crime Doctor, Erle Stanley Gardner created Perry Mason—a crime-solving attorney. Fitting right in, the Crime Doctor series, which had its origins on the radio, features a psychiatrist who works the underworld. Little-watched or known today, these simple whodunits, mostly before the age of television, cast a klieg light on what audiences of the World War II and immediate-postwar eras were making of the emergent field of psychotherapy.

By the 1950s, as many of the films in the AMHF series find their making or setting (and later), the idea of “the patient on the couch” had entered general discourse. It was even trendy to reveal one was seeing “my shrink.” These visits signified affluence and enlightenment. But the early 1940s were different. The skepticism toward therapy and the interior world of emotion was largely still felt in North American society, slower on the uptake than continental Europe, and thus provided fertile soil for the Crime Doctor to work in less-threatening ways: demonstrating, however loosely, the new (mostly Freudian) discoveries of motive as the key to behavior, especially the interiority of deviance. Thus, a clear subtext of the series, right at its origin, involves psychiatry in the age-old question of self-identity.

“During the depression, a man (actor Warner Baxter) is thrown from a speeding car. When he regains consciousness, he has amnesia. He is visited by a man who accuses him of faking his condition. The stranger calls the patient Phil, demanding to know what happened to a valise, then runs away when ‘Phil’ summons a nurse for help. When the man recovers, he takes the name Robert Ordway, after a hospital benefactor.

“Ordway’s doctor, John Carey (Ray Collins, who incidentally portrayed Ordway on the radio show), wants to continue treating him and offers lodging in his house. All attempts to discover his identity fail, so Ordway decides to learn all he can about his condition. After ten years, he has become a successful psychiatrist, in partnership with Carey. Ordway begins treating prison inmates. He is so successful, he is named head of the state parole board.

“While on a date with social worker Grace Fielding (Margaret Lindsay), he is recognized by two men from his past: Joe Dylan (Harold Huber) and Nick Ferris (Don Costello). They and a third man, Emilio Caspari (John Litel), are unsure if he is their partner in crime. They persuade convict Pearl Adams, their associate’s ex-girlfriend, to apply for parole. At her hearing, she calls Ordway “Dr. Morgan”. Ordway badgers her until she reveals that he is Phil Morgan, the mastermind of a $200,000 (a fortune during the Great Depression) payroll robbery from which the money was never recovered.

“To trigger his memory, he contacts the three men and reenacts the events of the day he lost his memory. Tempers flare and the men fight. During the struggle, Ordway is struck on the head and remembers his past. He also acquires the gun. He calls the police and has the gang arrested.

“Insisting on being tried for the robbery, Morgan admits his wrongdoing, but takes pride in his accomplishments since. The jury finds him guilty, but recommends clemency. The judge sentences him to the minimum term of ten years, then suspends the sentence, saying, ‘We need men like you.'”

In a popular, unsophisticated, uncomplicated way, Crime Doctor explores themes, better developed as they are, from Hitchcock, Don Juan DeMarco (identity Awakenings, The Three Faces of Eve, and others in this series. What Crime Doctor and its nine sequels conveys, with the distance of time (seventy years at this writing), is something of the Zeitgeist, within a pulp-fiction-like or almost film-serial setting, as newer and subtler modalities of emotional care infiltrated the general culture.